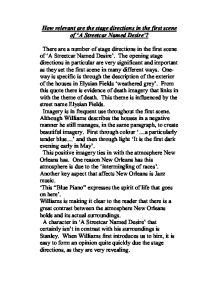 How relevant are the stage directions in the first scene of 'A Streetcar Named Desire'?

How relevant are the stage directions in the first scene of 'A Streetcar Named Desire'? There are a number of stage directions in the first scene of 'A Streetcar Named Desire'. The opening stage directions in particular are very significant and important as they set the first scene in many different ways. One-way is specific is through the description of the exterior of the houses in Elysian Fields 'weathered grey'. From this quote there is evidence of death imagery that links in with the theme of death. This theme is influenced by the street name Elysian Fields. Imagery is in frequent use throughout the first scene. Although Williams describes the houses in a negative manner he still manages, in the same paragraph, to create beautiful imagery. First through colour '...a particularly tender blue...' and then through light 'It is the first dark evening early in May'. This positive imagery ties in with the atmosphere New Orleans has. ...read more.

'He sizes up women at a glance with s****l classifications'. Williams is almost 'teasing' us as he makes us doubt our expectations of certain characters. We now endeavour not to hold any ides that are preconceived. Another character in 'A Streetcar Named Desire' whom we constantly change our opinion of is Blanche. When Williams first introduces us to her, he describes her appearance first. This reflects how appearance 'comes first' to Blanche. 'She is daintily dressed in a white suit' There is evident use of colour here and white is related to the concept of innocence and purity. This is ironic as we later find out that Blanche is far from angelic. Williams also describes Blanche's clothes as very elegant and expensive. '...a fluffy bodice, necklace and earrings of pearl'. Blanche is oblivious to the fact that her appearance holds some semblance. Williams is careful in these stage directions not to give the reader the wrong impression so he is very specific when describing Blanche's look. ...read more.

'Stella goes into the bathroom. Outside the men's voices can be heard'. He is able to set the scene and create the right mood. 'Above the music of the "Blue Piano" the voices of people on the street can be heard overlapping'. Overall Tennessee Williams's use of stage directions in 'A Streetcar Named Desire' are vital to the play as they make it more comprehendible and more importantly they give the play ambience. When the play 'A Streetcar Named Desire' was performed to an audience, the stage directions had to be perfect. Williams designed them to be as detailed and precise as possible so the actors would therefore perform the play exactly the way he had intended. We can apply this theory when reading the play; Williams wants us to pay particular attention to the stage directions in order for us to read the play the way he intended it to be read. We then get the same pleasure from reading it as a book as people did watching it as a play. ...read more.