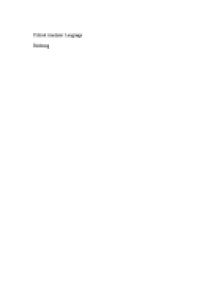 ﻿Critical Analysis: Language Birdsong Throughout the novel, Sebastian Faulks makes use of poetic language and tools to create atmosphere and give his descriptions more power and imagination. He also uses symbolic language to subliminally inform or remind the reader of certain points of interest. An example of this can be seen right at the beginning of the novel in the description of the house in which the Azaire family live. Faulks tells us that it is a ?strong, formal? building, behind which hide ?unseen footsteps?. These descriptions afford the house similar qualities to its owners, namely strength and mystery, but also imply hidden intrigues. This immediately telegraphs that something secretive may be about to happen within the walls of this building. Creating realistic tension or atmosphere is vital in a novel of this type, where the reader could otherwise never hope to fully understand the motivations behind the actions of the characters involved. Faulks achieves this in several sections of the novel, most notably during the boat trip on the River Somme, where he creates a sultry, sensuous, indulgent atmosphere, in which the tension between Isabelle and Stephen becomes almost too great for them to tolerate. ...read more.

In addition, there are several instances where the reader may relate Faulks?s language in the novel directly to some of the poetry of the First World War. These include a reference, in Part Two, to Douglas ?pouring himself away?, as Stephen remembers the soldier?s b****y death in the trenches. This statement is reminiscent of two First World War poems. Firstly, in Disabled, Wilfred Owen mentions that the maimed subject of his poem had ?poured [his blood] down shell-holes?. Secondly, Rupert Brooke?s The Dead (i), tells us of men who have ?poured out the red/Sweet wine of youth?. Both poets and Faulks are reminding their readers that these men did not choose to pour away their blood, but have done so metaphorically, in that the war has forced them to waste their lives. The scenes underground, especially when Stephen is trapped with Jack Firebrace and then rescued by Levi, are reminiscent of Owen?s Strange Meeting. In this poem, Owen describes an encounter between two soldiers from opposing sides. They meet, essentially, in h**l, although Owen describes this as simply an underground tunnel. ...read more.

There is some significance in this, as Weir?s last encounter with Stephen had resulted with his friend angrily pushing him face-down in the mud. This description allows the reader to understand the importance of this action, as it is mirrored in his death. Quite often, however, authors give more vivid descriptions of the deaths of less important characters, as the more important ones are simply too significant. It is enough just to know that that character is dead, so we do not need to understand the details surrounding his death. Sebastian Faulks varies his accounts of different characters? deaths, to the point where some are barely noticeable. The suicide of Barnes, for instance, is dealt with in one sentence as we are simply told that, while waiting for the Battle of the Somme to commence; he ?shot himself through the palate?. In this way, such deaths become as commonplace as the author intends. By not focusing on them, neither do the reader and these events take on, therefore, less significance. That is not to say that Faulks is implying that the deaths of the men were not important, but that there were so many of them, he could not possibly give an equal amount of description to each one. ...read more.