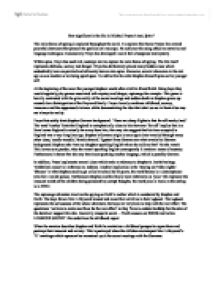 How significant is the title in Michael Fraynes text, Spies?

How significant is the title in Michael Frayne's text, Spies? The main theme of spying is explored throughout the novel. To explore this theme Frayne has created powerful characters that present the qualities of a true spy. He achieves this using effective narrative and language techniques. Conclusively Frayn has developed a novel full of suspense and mystery. Within spies, Frayn has used rich, nostalgic text to explore its main theme of spying. The title itself represents darkness, secrecy and danger. Frayn has deliberately placed many hidden clues which undoubtably leave us puzzled and ultimately turn us into spies. Moreover, several characters in the text spy on one another or are being spied upon. To add to this the older Stephen himself spies on his younger self. At the beginning of the novel the younger Stephen would often visit his friend Keith. Being boys they would regularly play games associated with mystery and danger, espionage for example. ...read more.

'Cabbalistic moon' is a reference to Judaism. Another implication is the 'staying on Friday nights'. 'Sheeny' is what Stephen used to get called at school by his peers, the word sheeny is a contemptuous term for a Jewish person. Furthermore Stephen and his family were referred to as 'juice' this represent the innocent minds of the children being poisoned by corrupt thoughts, the word juice is ironic as the setting is in WW2. The espionage adventure involves the spying on Keith's mother which is conducted by Stephen and Keith. The boys follow Mrs.'s Hayward around and record her activities in their logbook. The logbook represents the seriousness of the whole adventure; the boys are very keen to help with the war effort. The quotations 'we have to make sacrifices for the war effort' as they 'have to endure hardship for the sake of the duration' support this idea. Ironically misspells secret... 'Keith crosses out BIRDS and writes LOGBOOK SECRIT' this underlines the childhood aspect. ...read more.

Frayn invokes a sense of mystery at the beginning. The narrator describes the privet having a 'sweet and luring reek' this oxymoron represents the doubt that fills the narrators mind at the time. This indicates even the older Stephen is still bewildered by all the unresolved events that took place in the past. 'For a moment I'm a child again' this phrase has a dream-like quality to it which suggest that the place has awoken his senses. This leaves the reader questioning as to why a shrub can trigger such strong emotions. This engages the reader's attention, which leaves us with a sense of mystery and suspense. Keith and Stephen are both very secretive about their adventure; this gives their characters a spy-like quality. When they are in the privet they mention 'no one in the world can see us'. Stephen also has a very courageous character as he follows Keith's mother to the tunnels. The setting, which is at nighttime, adds an element of concern and danger. In addition Frayn describes the scene through the young Stephen himself this makes us feel much more closer to the experience. ...read more.