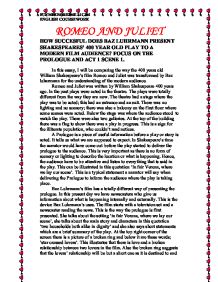 HOW SUCCESFUL DOES BAZ LUHRMANN PRESENT SHAKESPEARES' 400 YEAR OLD PLAY TO A MODERN FILM AUDIENCE? FOCUS ON THE PROLOGUE AND ACT 1 SCENE 1.

ROMEO AND JULIET HOW SUCCESFUL DOES BAZ LUHRMANN PRESENT SHAKESPEARES' 400 YEAR OLD PLAY TO A MODERN FILM AUDIENCE? FOCUS ON THE PROLOGUE AND ACT 1 SCENE 1. In this essay, I will be comparing the way the 400 years old William Shakespeare's film Romeo and Juliet was transformed by Baz luharmann for the understanding of the modern audience. Romeo and Juliet was written by William Shakespeare 400 years ago. In the past plays were acted in the theatre. The plays were totally different from the way they are now. The theatre had a stage where the play was to be acted; this had an entrance and an exit. There was no lighting and no scenery; there was also a balcony on the first floor where some scenes were acted. Below the stage was where the audience stood to watch the play. There were also two galleries. At the top of the building there was a flag to show there was a play in progress. This is a sign for the illiterate population, who couldn't read notices. A Prologue is a piece of useful information before a play or story is acted. It tells us what we are supposed to expect. In Shakespeare's time the narrator would have come out before the play started to deliver the prologue to the audience. ...read more.

The two towers with the names MONTAGUE AND CAPULET suggest wealth and probably business rivalry, which a modern audience would understand. It also shows they are both well-to-do families. We can also say they are of the same status: It also has shots of the statues of Jesus and Mary this shows a church is involved and it reflects the Catholic religion practised in Verona. There are also flashes of murder, city in flames, police aircraft. People in these flashes have worried and troubled looks on their faces. There is also this newspaper article with a caption' ANCIENT GRUDGE'. This explains that the two families have had this grudge for years and generations. This is because a modern audience is literate; the film director can use text on the screen, whereas Shakespeare's original audience could not read. The line' civil blood makes civil hands unclean' is illustrated using the flashes of fire in the streets, bloodshed, and violence. Another major difference between the films is the names and appearance. In Shakespeare's original play the heads of the families were just called Lady and Lord Capulet or Montague and to differentiate the families they would have probably used red clothes for a family and blue for another family. ...read more.

The mayhem which follows is very familiar to the audience who see action movies. The Prince of Verona is updated to be the chief of police. He is the peace maker and makes a stand. He calls both head of the families and tells them if any fight reoccurs disturbing the peace of the streets they will pay for it with their lives. In conclusion, I think Baz Lurhmann has done a very good job. The music interprets and indicates the stage of the scenes. Instead of swords, they use guns which are a normal sight to a modern audience as they are used to watching action films. The dressing also speaks a lot of the characters, so does the body language, especially that of Tybalt: his looks, his pose and the way he carries himself suggest trouble. The violent scene shows irresponsibility and senselessness of the feud. It is this pointless violence that destroys the lives of the innocent lovers 'ROMEO AND JULIET' whom the play is named after and whom we meet later in the play. Finally, I think the opening is very effective as everyone can understand through the clips and well delivered Prologue. The costume and setting of the scene are also important as 'it speaks to the Audience' even if they do not understand the Shakespearean language. . FUNMI EBOREIME 11CJM ENGLISH COURSEWORK ...read more.