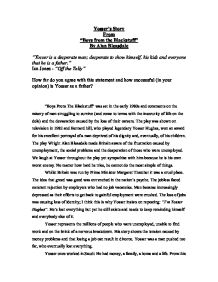 How successful is yosser hughes as a father? (boys from the blackstuff)

Yosser's Story From "Boys from the Blackstuff" By Alan Bleasdale "Yosser is a desperate man; desperate to show himself, his kids and everyone that he is a father." Ian Jones - "Off the Telly" How far do you agree with this statement and how successful (in your opinion) is Yosser as a father? "Boys From The Blackstuff" was set in the early 1980s and comments on the misery of men struggling to survive (and come to terms with the insecurity of life on the dole) and the devastation caused by the loss of their careers. The play was shown on television in 1982 and Bernard hill, who played legendary Yosser Hughes, won an award for his excellent portrayal of a man deprived of his dignity and, eventually, of his children. The play Wright Alan Bleasdale made Britain aware of the frustration caused by unemployment, the social problems and the desperation of those who were unemployed. We laugh at Yosser throughout the play yet sympathise with him because he is his own worst enemy. No matter how hard he tries, he cannot do the most simple of things. Whilst Britain was run by Prime Minister Margaret Thatcher it was a cruel place. The idea that greed was good was entrenched in the nation's psyche. The jobless faced constant rejection by employers who had no job vacancies. ...read more.

Social services had probably already been contacted at this point, too little - too late. One thing Yosser needs from his children is respect; he wants to impress them and he wants them to be proud of him. In scene 18 Yosser and his children are at a pub. There is a charity 'do' going on and two celebrities Graeme Souness and Sammy Lee are present. Yosser sit in between them both whilst his children stand watching. The pub manager tells Yosser that there are no children allowed. Yosser "stares at him malignantly" and then the manager speaks again; "Well just this once, hey. Just for a few minutes". Uninvited, Yosser joined the celebrity party as his children look on but no-one asked him to leave because they didn't want to risk upsetting him and him causing a scene. Yosser starts a conversation with Souness, he looks at the children whilst he was talking and they smile back at him, they are impressed. Yosser likes to please his children. Yosser sometimes gets frustrated and, because he cant control his emotions, he "head bangs". It takes place of talking about things and he covers his emotional pain with physical pain. His children have got used to it and accept it as normal behaviour. They don't see anything wrong with head butting walls. ...read more.

He is attempting suicide, he doesn't want to be alive anymore and he has nothing worth living for. One police man says "let the b*****d die" but the other won't let this happen and charges into the lake after him. Yosser is already failing his suicide attempt; he couldn't even do this right. The policeman take hold of him and carry him out of the lake. Yosser lost everything he ever had, his job, his family and his home. He failed at everything he ever tried to do, even simple things like cooking fish fingers. If he wasn't so stubborn and proud, local authorities could have helped him and he could still have his children. He refused to co-operate with anyone and this is what lead to his breakdown. He couldn't even commit suicide without failing; he was a fine example of what a failure was. He was a failure as a father yet I do believe he loves his children. He wasn't a very good father but he did protect his children and he did care about them. They were the one thing he loved more than anything and risked everything for them. His fear of them taken away was a phobia that played in his mind every minute of every day. If he didn't care about them would he really go through all that trouble just to keep them by his side? ...read more.