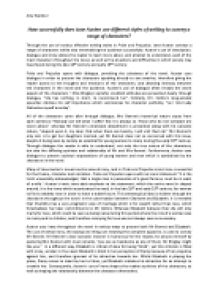 How successfully does Jane Austen use different styles of writing to convey a range of characters?

﻿Amy Banister How successfully does Jane Austen use different styles of writing to convey a range of characters? Through the use of various effective writing styles in Pride and Prejudice, Jane Austen conveys a range of characters whilst also entertaining the audience successfully. Austen?s use of description, dialogue and irony allows the reader to learn more about, and attempt to understand, each of the main characters throughout the novel, as well as the situations and difficulties in which society may have faced during the late 18th century and early 19th century. Pride and Prejudice opens with dialogue, providing the substance of the novel. Austen uses dialogue in order to present the characters speaking directly to one another, therefore giving the reader access to the thoughts and emotions of the characters, and allowing intimacy between the characters in the novel and the audience. Austen?s use of dialogue often reveals the worst aspects of the characters ? Miss Bingley?s spiteful, snobbish attitudes are presented clearly through dialogue, ?she has nothing, in short, to recommend her?. ...read more.

This stereotypical idea is evident through the characters throughout the novel. In the conversation between Charlotte and Elizabeth, it is revealed that Charlotte has a very pragmatic view of marriage which is for wealth rather than love, which foreshadows her later commitments to Mr Collins. Whereas Elizabeth believes that she will only marry for love, which could be seen as being naive during this period where the role of a woman was to marry and to children, and therefore marrying for love was not always seen as necessary. Austen uses irony throughout the novel in various ways to present both Mr Bennet and Elizabeth. The use of verbal irony, the saying one thing, yet meaning the complete opposite, is used to convey Mr Bennet. Mr Bennet?s clear sarcastic manner is humorous for the reader; he amuses himself by pestering Mrs Bennet with cruel remarks, ?you are as handsome as any of them, Mr Bingley might like you.? In a different way, Elizabeth is critical of Jane for being ?blind?, yet this ...read more.

The narrators? descriptions are able to change the perspective of the reader, as there is no evidence to support the point; the audience takes the narrator?s word to be the truth. Mr Darcy is initially presented to be handsome and wealthy by the narrator?s descriptions: ?Mr Darcy soon draw the attention of the room by his fine, tall person, handsome features, noble mein?, despite these positive descriptions of Darcy, the narrator automatically changes the reader?s opinion of Darcy through the description: ?he was the proudest, most disagreeable man in the world.? Therefore presenting how influential Austen?s descriptions are to convey character?s to the audience and alter the reader?s opinion of them. Austen use of different styles of writing allows the reader to gain some intimacy with the characters and understand more about them, therefore meaning that through the use of writing styles Austen has conveyed the characters to the audience successfully, by allowing the reader to relate to each of the characters. ...read more.