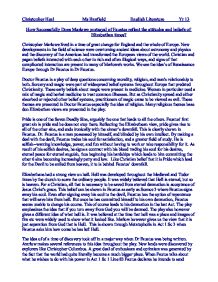 How Successfully Does Marlowe portrayal of Faustus reflect the attitudes and beliefs of Elizabethan times?

Christopher Heal Ms Banfield English Literature Yr 13 How Successfully Does Marlowe portrayal of Faustus reflect the attitudes and beliefs of Elizabethan times? Christopher Marlowe lived in a time of great change for England and the whole of Europe. New developments in the field of science were overturning ancient ideas about astronomy and physics and the discovery of the Americas had transformed the European views of the world. Christian and pagan beliefs interacted with each other in rich and often illogical ways, and signs of that complicated interaction are present in many of Marlowe's works. We see the idea's of Renaissance Europe through Dr Faustus in Dr Faustus. Doctor Faustus is a play of deep questions concerning morality, religion, and man's relationship to both. Sorcery and magic were part of widespread belief systems throughout Europe that predated Christianity. These early beliefs about magic were present in medicine. Women in particular used a mix of magic and herbal medicine to treat common illnesses. But as Christianity spread and either absorbed or rejected other belief systems, practitioners of magic came to be viewed as evil. These themes are presented in Doctor Faustus especially the idea of religion. Many religious themes base don Elizabethan views are presented in the play. ...read more.

Marlow however gives us the view that it is just separation from God that is h**l. This is shown through Metatopholis in Act 1 Sc 3 when Faustus asks him how come he has left h**l. The idea of of a time of discovery took off in a major way when Dr Faustus was being written. Amrlow makes several references to this idea throughout the play. New lands were discovered by explorers like Christopher Columbus. A great deal of enthusiasm and optimism was generated by the fact that the world had quite literally become a much bigger place. When Fautus talks about what he wishes to do with his power in Act 1 Sc 1 Line 83 Fautus declares he intends to send spirits to "search all corners of the new-found world." He also sends Met. To the other side of the world to fetch the Duchess some grapes in Act 4. This shows that like the scholars at the time Faustus to ahs an interest in exploration and discovery. Fautus also has an interest in expanding his knowledge. At the beginning of the book Fautus is alking to himself about what knowledge he wishes to have. He rejects a range of preoffessions including that of a Physican and lawyer. ...read more.

Throughout the play Faustus shows a keen interest in the occult In the opening of Act 1 Scene 3 we the audience see Faustus conjuring a devil. In Elizabethan times spells, folklore, superstition were a normal part of life. This is shown in Line 7-'Seeing thou hast prayed and sacrificed to them', where Faustus prepares for his conjuring act. It is ironic that he prays, as he does not believe in God. Following this ritual, he draws a circle around himself, to keep evil spirits from harming him. This is ironic once more, as he is conjuring the devil at the same time- who is surely the most evil spirit possible. The entire conjuring scene is set to challenge religion, as many Elizabethans did. This may have been because the religion is England at the time was very unstable and Elizabethan's had to compel to what ever religion the law enforced on them. It is not just the Renaissance period Faustus highlights in his play. He also wrote a play he knew would appeal to his audience. The use of slapstick comedy in the play during such scene as making a mockery of the pope and his head falling off would have appealed to the lower uneducated class masses that he would have expected to view his plays. He wrote a simple humor for simple people to understand. ...read more.