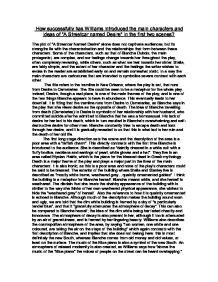 How successfully has Williams introduced the main characters and ideas of &quot;A Streetcar named Desire&quot; in the first two scenes

How successfully has Williams introduced the main characters and ideas of "A Streetcar named Desire" in the first two scenes? The plot of "A Streetcar Named Desire" alone does not captivate audiences, but its strengths lie with the characterisation and the relationships that form between these characters. Some of the characters, such as that of Blanche Dubois, the main protagonist, are complex, and our feelings change towards her throughout the play, often completely reversing, while others, such as what we feel towards her sister, Stella, are fairly simple, and the extent of her character and the feelings the writer wishes to evoke in the reader are established early on and remain somewhat static. In a way the main characters are caricatures that are intended to symbolise severe contrast with each other. The title refers to the tramline in New Orleans, where the play is set, that runs from Desire to Cemeteries. The title could be seen to be a metaphor for the whole play. Indeed, Desire, though a real place, is one of the main themes of the play, and is one of the few things Blanche appears to have in abundance. This eventually leads to her downfall. It is fitting that the tramline runs from Desire to Cemeteries, as Blanche says in the play that she views desire as the opposite of death. ...read more.

His r**e of Blanche shows his animal side at its most destructive. It shows no human remorse, just a basic need to avenge himself in the most animalistic and brutal way he can think of. It combines the ideas of Stanley having uncontrollable animal violence and l**t. The s****l aspect of Stanley's character is also introduced to the reader early on. In the first long description of Stanley we are told "Since earliest manhood the centre of his life has been pleasure with women". When he looks at women Williams describes "crude images flashing into his mind". This too shows how he views women, and in a way life. He sees women in a completely derogatory way, as existing purely for the pleasure of men. He sees life in this way too. Throughout the play he does not appear to have any higher level, operating purely to satisfy his animal needs. The first time he meets Blanche he says "do you mind if I take off my shirt?" and starts to remove it without waiting for a reply. This is a blatant display of his sexuality; he is using it to intimidate Blanche in a very primitive way. It also accentuates the difference between the ideas we have already built about Stanley, and the original descriptions of Blanche and our initial impressions. ...read more.

that she has knows where it is, showing that she is someone who conceals aspects of herself, and maybe has a drinking problem. Williams' father had a drinking problem, meaning he had first hand experience of alcoholism and the damage it could do to people. The contrast is also in the way Stanley and Blanche talk. Stanley often uses incorrect grammar, whereas Blanche has quite a poetic way of speaking and makes literary references, again emphasising the difference in education between the two. Throughout the first scene Blanche seems to be on the verge of breaking down, and is slightly hysterical, especially during her long outburst to Stella about how she lost Belle Reve. We get the impression that she has been severely disturbed by her ideals, and her mental state appears to be quite fragile. She says "I was on the verge of- lunacy, almost!" and says to herself "I've got to keep hold of myself". Both of these show how she is trying to keep herself from mentally crumbling and hint towards the start of a mental breakdown that takes place throughout the play. Williams' own sister had a mental breakdown and was eventually lobotomised. Another aspect of Blanche's character that is linked to this is her apparent vanity. I say apparent, because underneath it she is very insecure about her appearance. She needs constant reassurance that she looks young and beautiful. ...read more.