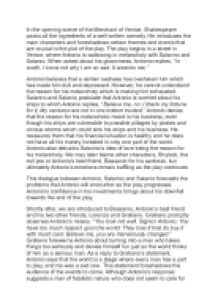 How the opening scene of &quot;The Merchant of Venice&quot; foreshadows the events of the play.

Ã¯Â»Â¿In the opening scene of the Merchant of Venice, Shakespeare packs all the ingredients of a well written comedy. He introduces the main characters and foreshadows certain themes and events that are crucial to the plot of the play. The play begins in a street in Venice, where Antonio is wallowing in melancholy with Salarino and Salanio. When asked about his gloominess, Antonio replies, â€œIn sooth, I know not why I am so sad. It wearies me; â€ Antonio believes that a certain sadness has overtaken him which has made him dull and depressed. However, he cannot understand the reason for his melancholy which is making him exhausted. Salarino and Salanio postulate that Antonio is worried about his ships to which Antonio replies, â€œBelieve me, no: I thank my fortune for it, My ventures are not in one bottom trusted,â€ Antonio denies that the reason for his melancholic mood is his business, even though his ships are vulnerable to possible pillages by pirates and vicious storms which could sink his ships and his business. ...read more.

â€œWell; tell me know, what lady is the same to whom you swore a secret pilgrimage, that you today promised to tell me of ?â€ Antonio reminds Bassanio that he was going to tell him about the lady who he fell in love with. Bassanio tells Antonio that he has been living way beyond his means and owes a monumental debt to Antonio. â€œBut my chief care is, to come fairly off from the great debts.â€ Although Bassanioâ€™s description of his lifestyle reflects an immature and careless man, he possesses a sense of responsibility to be an honest person and find a genuine solution to his debt. Bassanio requests Antonio to lend him more money in order to woo an heiress in Belmont, â€˜a lady richly leftâ€™ whom he was assured he could win over if he had the money. Bassanio confesses that he has â€˜disabled mine estateâ€™ but pledges to honour his debt this time around and be extremely careful. â€œTo you, Antonio, I owe the most, in money and in love.â€ Bassanio tells Antonio that he is in debt to innumerable people and owes the most to him - both money and gratitude. ...read more.

In the playâ€™s opening scene, Shakespeare prognosticates Antonioâ€™s worrisome future suggested by his indebtedness to a creditor and the loss of his ships and merchandise. The themes of friendship, love, loyalty, money and its value which were introduced in this scene will prove to be integral to the plot of the play. I, as a reader, feel that in the first scene of act one, Shakespeare has wonderfully foreshadowed certain events that seem to occur as the play progresses. The art of exposition has been used dextrously by the â€˜Bard of Avonâ€™. The playwright exemplifies the characteristics of Bassanio, Antonio and other characters. Characteristics like Bassanioâ€™s recklessness and immaturity tell us why he is in debt, and Antonioâ€™s love and loyalty show us why he is ready to do anything for Bassanio, whether it be to put his business at risk or his own life. This represents the true meaning of friendship, where one is ready to go to extreme lengths just to fulfil his friendâ€™s wishes and desires. In conclusion, the audience and the readers can clearly discern that Shakespeare, with his astounding dexterities, strikes the keynote for the entire play in the opening scene. ...read more.