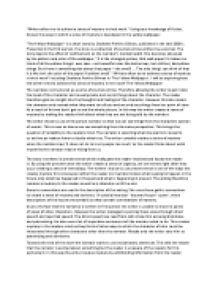 ﻿?Writers often try to achieve a sense of mystery in their work.? Using your knowledge of fiction, discuss the ways in which a sense of mystery is developed in the yellow wallpaper. "The Yellow Wallpaper" is a short story by Charlotte Perkins Gilman, published in the late 1800?s. Presented in the first person, the story is a collection of journal entries written by a woman. The story depicts the effect of confinement on the narrator's mental health. She becomes obsessed by the pattern and color of the wallpaper. "It is the strangest yellow, that wall-paper! It makes me think of all the yellow things I ever saw ? not beautiful ones like buttercups, but old foul, bad yellow things. ...read more.

As a result of this we don?t get to see the whole picture. In this way the writer creates a sense of mystery by making the reader think about what they are not being told by the narrator. The writer chose to use a first person narrator so that we can see things from the characters opinion of events. This is seen as bias as we see everything from the same perspective. This brings the question of reliability to the readers mind. The narrator is selecting what she wants to reveal to us and we as readers have to decide what true. The writer certainly creates a sense of mystery when the narrator says ?It does not do to trust people too much? as the reader thinks about what mysteries the narrator may be hiding from us. ...read more.

Due to the fact that the narrative is written in first person the writer is unable to show he points of views of other characters. However the writer manages to portray these views through direct speech and reported speech. The direct speech we read from John show him as being dismissive and patronizing. He also uses a lot of imperative sentences tell the narrator what to do. This creates mystery in the readers mind as they think of other ways in which the character of John could be interpreted through other characters other than the narrator. Maybe only the writer sees him as patronizing and dismissive. Towards the end of the novel the narrator starts to use exclamatory sentences. This tells the reader that the narrator is excited about something but the reader is unaware of the reasons for this excitement. In this way the writer creates mystery by withholding information from the reader. ...read more.