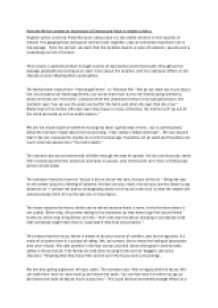 How the Writer creates an impression of Setting and Place in Angelas Ashes.

﻿How the Writer creates an impression of Setting and Place in Angela?s Ashes. Angela?s ashes, wrote by Frank McCourt, takes place in a city called Limerick in the republic of Ireland. The geographical setting and environment, together, play an extremely important role in the passage. From the extract, we learn that the location depicts a sense of isolation, poverty and a underlying current of tension. This tension is carefully written through a series of descriptive words that builds throughout the passage, gradually worsening as we learn more about the location, and thus taking an effect on the characters and reflecting their personalities. The family have moved from ??Harstonge Street?? to ??Barrack Hill.?? We do not learn too much about the circumstances of Harstonge Street, but we do learn that due to the family losing members, which we know are ''the twins'', because when the characters venture into buying furniture, the narrators says ''we can use the pram we had for the twins and when she says that she cries.'' ...read more.

The narrator mentions that the ??house is at the end of the lane, the last of the six.?? Being the last on the street conjures a feeling of isolation, the last one you reach, the one you are less likely to pay attention to ? I believe the author strategically places it the house at the end so that the reader will subconsciously think of it as the last one in importance. The house requires furniture, which can be either because there is none, or the furniture there is not usable. Either way, this proves taxing to the characters as they have to go find second hand furniture, which may bring illness to them: ''she's very worried about sleeping in somebody's bed that somebody might have died in, especially if they had consumption.''. This shows that the house, which is meant to be your source of comfort, acts as the opposite. ...read more.

your house gives you this feeling of being rich and can make you feel happy, even though to us it is a innocuous, normal everyday task which does cannot draw emotion, but for the narrator, it can. A man then uses the lavatory in their house which leads to confusion from the family. The man then states ''This is not your lavatory. Sure, isn't this the lavatory for the whole lane.'' ''I can tell you it gets very powerful here in the warm weather, very powerful all together.'' This acts a a device of foreshadowing. It foreshadows how living in this house will only manifest to be worse over time, and subtly lets the reader know of the upcoming struggle this family has living in this house. It again reiterates the fact this is house is potentially unsafe, as now not only the furniture will bring them disease, but the lavatory too. By Lucy Howell. ...read more.