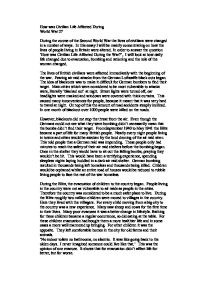 How was civilian life affected during world war 2?

How was Civilian Life Affected During World War 2? During the course of the Second World War the lives of civilians were changed in a number of ways. In this essay I will be mainly concentrating on how the lives of people living in Britain were altered. In order to answer the question 'How was Civilian Life Affected During the War?', I will look at how daily life changed due to evacuation, bombing and rationing and the role of the woman changed. The lives of British civilians were affected immediately with the beginning of the war. Fearing air raid attacks from the German Luftwaffe black outs began. The idea of blackouts was to make it difficult for German bombers to find their target. Main cities which were considered to be most vulnerable to attacks were, literally 'blacked out' at night. Street lights were turned off, car headlights were masked and windows were covered with thick curtains. This caused many inconveniences for people, because it meant that it was very hard to travel at night. ...read more.

Many saw sheep and cows for the first time in their lives. Many poor evacuees it was a better change in lifestyle. Bathing for these children became a regular occurrence, so did eating at the table. For these children evacuation had bought them a more healthier life and in some cases a more well mannered up bringing. For other children it was the opposite. They left comfortable homes in the city for old farms and their animals. 'No indoor toilets no bathrooms, no electric. It was like going back to the olden days. I never imagined someone could live like that.' This was the opinion of one evacuee. It shows that for evacuation didn't affect life for better, but for worse. There was one aspect of the war that affected all the civilians of Britain, whether they lived in big cities or the country, rationing. As most of the food being brought to Britain in ships were intercepted by German submarines, supplies began to run short. ...read more.

With women working and doing the jobs men normally did men were able to go and fight inthe war. In conclusion and in answer to the question, 'How was Civilian Life Affected During World War 2?', it can be said that civilian life was greatly affected. For everyone living in big cities there was the risk of being made homeless or killed by German bombing. This may have caused people not to take their lives for granted. People were put in increased danger when they travelled at night due to the blackouts. Children were separated from their parents when they were evacuated to the country. However, many children enjoyed the country way of life. Rationing meant that everyone had to cut down on food. Maybe the biggest change in civilian life happened to the role of the woman. During the war she became a much more needed and respected member of society. This evidence shows that, for many people that war brought hard times and much work was needed to pull through. Overall, the war brought many changes on civilian life, some were good, others bad. ...read more.