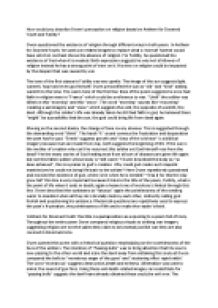 How would you describe Owens perception on religion based on &quot;Anthem for Doomed Youth&quot; and &quot;Futility&quot;?

﻿How would you describe Owen?s perception on religion based on Anthem for Doomed Youth and Futility? Owen questioned the existence of religion through different ways in both poem. In Anthem for Doomed Youth, he used war related images to replace what a ?normal? funeral would have which in contrast shows the absence of religion. For Futility, he questioned the existence of God when it is needed. Both expression suggests he was not a follower of religion instead he has a strong point of view on it. His view on religion could be impacted by the despair that was caused by war. The tone of the first stanza in Futility was very gentle. The image of the sun suggests light, warmth, hope and even god himself. Owen personified the sun as ?old? and ?kind? adding warmth to the tone. The warm tone of the first four lines of the poem suggests he once had faith in religion even in ?France? which could be a reference to war. ...read more.

Why could god create such majestic mankind yet he could not bring life back to the solider? Here Owen repetitively questioned and mocked the existence of god, where is he when he is needed? ?Was it for this the clay grew tall? this line is very important because it links to the title of the poem, Futility, what is the point of life when it ends in death, again a heavy tone of mockery is hinted through this line. Owen described the sunbeams as ?fatuous? again the pointlessness of the sending warm to mankind when all they do is brutally destroy each other, indirectly calling god foolish and questioning his existence. Rhetorical questions are repetitively used to express the poet?s frustration, the pointlessness of life and to make the reader?s think. 'Anthem for Doomed Youth' the title is a juxtaposition as a opening to a poem full of irony. Throughout the entire poem Owen compared religious rituals to striking war imagery suggesting religion are not the saints they claim to be,instead just like war they are also covered in blood and sins. ...read more.

Again the irony,churches were suppose to spread peace yet they were the one who supported violence,they supported the evil acts. ?No mockeries? for the soldiers because their deaths have no dignity nor honour. It also suggests the attitude Owen has for religion, ?mockeries? as these religion rituals are just for the surface. These rituals does not make their deaths more honourable, does not take away sorrow from their family ,does not bring their lives back. The confusing comparisons Owen listed throughout the poem by substituting evil images for religious rituals makes the reader question if there is a difference between light and dark,could it be the same thing? Could the church be the devil in disguise? All these religion rituals at a funeral could be a mask for the dirty works of the devil,as a comfort for the family believing that their loved ones died honourably when their bodies was simply lined up and thrown into the underground which links to hell,going back to who they served in the war the devil. These two poems both expressed Owen?s perception on religion very clearly. He questioned the existence and purpose of religion. ...read more.