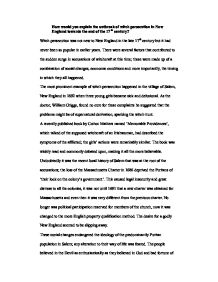 How would you explain the outbreak of witch persecution in New England towards the end of the 17th Century?

How would you explain the outbreak of witch persecution in New England towards the end of the 17th century? Witch persecution was not new to New England in the late 17th century but it had never been so popular in earlier years. There were several factors that contributed to the sudden surge in accusations of witchcraft at this time; these were made up of a combination of social changes, economic conditions and more importantly, the timing in which they all happened. The most prominent example of witch persecution happened in the village of Salem, New England in 1692 when three young girls became sick and delusional. As the doctor, William Griggs, found no cure for these complaints he suggested that the problems might be of supernatural derivation, sparking the witch-hunt. A recently published book by Cotton Mathers named 'Memorable Providences', which talked of the supposed witchcraft of an Irishwoman, had described the symptoms of the afflicted; the girls' actions were remarkably similar. The book was widely read and commonly debated upon, making it all the more believable. Undoubtedly it was the recent local history of Salem that was at the root of the accusations; the loss of the Massachusetts Charter in 1686 deprived the Puritans of 'their lock on the colony's government'. This caused legal insecurity and great distress to all the colonies, it was not until 1691 that a new charter was obtained for Massachusetts and even then it was very different from the previous charter. ...read more.

This was a cause of many jealousies. As well as this there was a split within Salem Village itself; the eastern part consisted of flat meadows ideal for farming, it was close to the Ipswich Road and waterways so it was easy to supply the town with food, hence gaining both economic and political power. The residents there became Blacksmiths, Carpenters and Innkeepers; they enjoyed an affluent life. The western part of the village was hindered with hills, marshes and rocky terrain not ideal for farming; it was rather isolated which prevented any involvement in the town market. People who lived there felt that the way their eastern counterparts thrived threatened their Puritan way of life. Congregational strife in the western part of Salem village was worsening with time; the tools the farmers worked with were very primitive and with each generation the farms became ever smaller as they were divided between the sons. This built on the long-standing jealousy strongly felt, and was undeniably an important factor in the outbreak of witch accusations. When Reverend Samuel Parris became the new minister in Salem village in 1692 he strongly denounced the flourishing economic status of Salem Town as the influence of the Devil, this increased the conflict between these two factions. This may well have been the final instigator, which saw the eruption of witch persecution. ...read more.

Others were associated with the supernatural in their daily lives, such as fortune- tellers, the first woman to be accused had told voodoo stories to the first 'victim'. Another important aspect was that, often, the accusers did not know the accused particularly well. In many circumstances it seems that misfortune would befall someone who had been uncharitable to a neighbour so in order to prevent any feelings of guilt (which plagued Puritans who felt they weren't living in Christian way), and to find a reason for their calamity, they would suggest witchcraft as the cause. A considerable proportion of the indicted were mobile and not originally from Salem village, therefore had few friends to defend them. This pattern is a clear indication that the irregular social dynamics of Salem contributed to the hysteria surrounding witchcraft. It cannot be ignored that the accusations of witchcraft developed from the tales of adolescent girls. It has been argued that this phenomenon was nothing more than their over-active imaginations, intended to enlighten their otherwise dreary daily routine. The outbreak of witch persecution owed its subsistence to many united factors. The combination of a frontier war, the unstable economic conditions, faction strife and envies together with the consequences of adolescent imagination all occurring at the same time resulted in this regrettable tragedy. It seems that the internal conflict within Salem itself needed a way to be played out, and ultimately the product of this was the ensuing witch-hunt. ...read more.