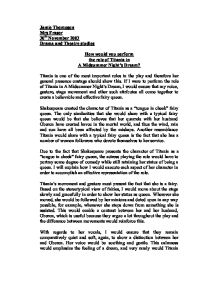 How would you perform the role of Titania in A Midsummer Night's Dream?

Jamie Thompson Mrs Fraser 30th November 2003 Drama and Theatre studies How would you perform the role of Titania in A Midsummer Night's Dream? Titania is one of the most important roles in the play and therefore her general presence onstage should show this. If I were to perform the role of Titania in A Midsummer Night's Dream, I would ensure that my voice, gesture, stage movement and other such attributes all come together to create a believable and effective fairy queen. Shakespeare created the character of Titania as a "tongue in cheek" fairy queen. The only similarities that she would share with a typical fairy queen would be that she believes that her quarrels with her husband Oberon have created havoc in the mortal world, and thus the wind, rain and sun have all been affected by the mishaps. ...read more.

Wherever she moved, she would be followed by her minions and doted upon in any way possible, for example, whenever she steps down from something she is assisted. This would enable a contrast between her and her husband, Oberon, which is useful because they argue a lot throughout the play and the difference between movements would reinforce this. With regards to her vocals, I would ensure that they remain comparatively quiet and soft, again, to show a distinction between her and Oberon. Her voice would be soothing and gentle. This calmness would emphasize the feeling of a dream, and very rarely would Titania use heavy, loud vocals in order to achieve her goals, such as winning arguments with her husband. Emotionally, Titania would be a very fragile and feminine figure: always looking for the best in everything - showing intelligence and a kind, quiet, almost flaccid nature. ...read more.

Her costume and general image would make sure that the audience have no doubts as to her importance or identity. I would possibly have the person playing Titania wear horns on her head or have fairy wings in order to highlight the fact that she is a fairy queen. The colours and fabrics used on the costume must create a misty glow about her, as with the other fairies, to create the image of it being a 'midsummer night's dream'. In conclusion, if I were to perform the role of Titania in "A Midsummer Night's Dream" I would make certain that Shakespeare's 'tongue in cheek' representation is achieved while still ensuring that her status is portrayed. I would do this by generalising her character around the idea that she is warm, caring, comic, fairy-like, imaginary and of higher importance to anybody else, yet unpredictable and diverse, ensuring that her character is adaptable enough to suit arguments and other fluctuations onstage. ...read more.