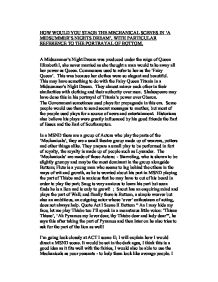 How Would You Stage the Mechanical Scenes In &amp;#145;a Midsummer&amp;#146;S Nights Dream&amp;#146;, With Particular Reference To the Portrayal of Bottom.

HOW WOULD YOU STAGE THE MECHANICAL SCENES IN 'A MIDSUMMER'S NIGHTS DREAM', WITH PARTICULAR REFERENCE TO THE PORTRAYAL OF BOTTOM. A Midsummer's Night Dream was produced under the reign of Queen Elizabeth I, she never married as she thought a man would take away all her power as Queen. Commoners used to refer to her as the 'Fairy Queen'. This was because her clothes were so elegant and beautiful. This may have something to do with the Fairy Queen Titania in a Midsummer's Night Dream. They almost mirror each other in their similarities with clothing and their authority over men. Shakespeare may have done this in his portrayal of Titania's power over Oberon. The Government sometimes used plays for propaganda in this era. Some people would use them to send secret messages to another, but most of the people used plays for a source of news and entertainment. Historians also believe his plays were greatly influenced by his good friends the Earl of Essex and the Earl of Southampton. In a MSND there are a group of Actors who play the parts of the 'Mechanicals', they are a small theatre group made up of weavers, potters and other things alike. ...read more.

This is empathising on the fact they have to spend their lunch arranging a play that they expect will get no where. They would be wearing brown cloths with some brown leather as well, this will make them look very average and show they have almost no social standing, Bottom shall be wearing an old suit, this still shows he's poor but also that he likes to look nice. Bottom would be a big show off always making jokes, I also think that I might change Bottom to a Jester instead of a weaver this would give him the chance of having more wit. The other Mechanicals would be dull people that grunt and sigh a lot. The light for my set would be dim but not dark, so it looks like a miserable day. The scene would take place in the market centre, with a few people wandering about going about their daily occupations of selling turnips :). A crowd would slowly surround the actors, as they become louder and merrier. When the small boy pours wine over Bottom he loses his confidence, yet I would use this to Bottoms advantage. ...read more.

In the scenes with Bottom and Titania I would play Bottom in a dreamy state as if not quite knowing what was happening and I would try to hide my surprise when I discover the large ears on my head, I would play this by using a high pitch tone of voice with a worried, perhaps quavering note. My clothing would be a very nice suit, probably white as it stands out and makes him look more important and exotic. This would make him stand out from his workmates even though he is a weaver by trade. A MSND is a love story where three worlds collide, the world of the Mechanicals, the fairies and the royalty, with Bottom in the middle of all this. This work of Shakespeare, unlike some of his others, for example Romeo and Juliet and the tragic end of their love, the play ends with all loose ends tied up and everyone is happy at the end with big smiles on their faces. The words often used for this 'Deus ex Machini' this translates as 'loose ends tied up'. This play seems to highlight women's equality and their power over men. This may also be linked with Elizabeth I as I said earlier. This indicates that the play would have been greatly influenced by her. ...read more.