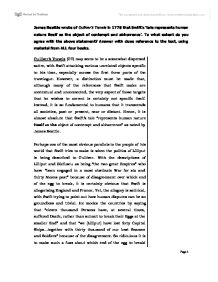 James Beattie wrote of Gulliver's Travels in 1778 that Swift's 'tale represents human nature itself as the object of contempt and abhorrence'. To what extent do you agree with the above statement? Answer with close reference to the text, using material from ALL four books. Gulliver's Travels (GT) may seem to be a somewhat dispersed satire, with Swift attacking various unrelated objects specific to his time, especially across the first three parts of the travelogue. However, a distinction must be made that, although many of the references that Swift make are contextual and unconnected, the very aspect of those targets that he wishes to correct is certainly not specific itself. Instead, it is so fundamental to humans that it transcends all societies, past or present, near or distant. Hence, it is almost absolute that Swift's tale "represents human nature itself as the object of contempt and abhorrence" as noted by James Beattie. Perhaps one of the most obvious parallels to the people of his world that Swift tries to make is when the politics of Lilliput is being described to Gulliver. With the descriptions of Lilliput and Blefuscu as being "the two great Empires" who have "been engaged in a most obstinate War for six and thirty Moons past" because of disagreement over which end of the egg to break, it is certainly obvious that Swift is allegorising England and France. ...read more.

When he still "observed it had yet some Life", he has to be so sure that he is safe by giving it "a strong Slash cross the Neck" so in order to "thoroughly [dispatch] it". Swift, is therefore, not exactly satirising Gulliver for his violence in the event of insecurity - that is a natural animal instinct that should not be corrected, but really for his relaxed and somewhat complacent attitude the moment he is assured that no one can harm him. Such an inclination is so true of humans in all generations and in all lands. This ridicule on Gulliver is further sustained when he arrives in Luggnagg and learns about the Struldbruggs. Not only does he get "struck with inexpressible Delight" and "[break] out into Expressions perhaps a little too extravagant", he becomes unexceptionally uncritical and full of flaws in his reasoning the moment he realises the human desire of living an immortal life has been fulfilled. He makes the unsound assumption by calling the Struldbruggs "Reverend Sages" and commenting them to be "too strict for the corrupt and libertine Manners of a Court" when the only difference about them from a normal human being is that they can live forever. ...read more.

Lastly, there is, Pedro de Mendez, the captain of the ship who found Gulliver after he was abandoned by the Houyhnhnms. As described by Gulliver, "he was a very courteous and generous Person" and despite being treated by Gulliver with ceaseless criticisms and expressions of disgust, "assured me he only meant to do me all the Service he was able, and spoke so very movingly". He likewise does all he can to sustain Gulliver while he was with him, and submits as much as possible to his crazy desire of not wanting to be in the company of humans. It must not be forgotten, however, that all the good aspects of humans shown are more of exceptions rather than anything significant. Moreover, they serve the bigger function of keeping the travelogue accessible and believable so that Swift's hidden satire can work its way into the reader. In conclusion, the first three books satirise specific targets, as well as Gulliver himself, for their human follies, while the last consolidates all the criticisms and make them resurface as a harsher and more venomous satire. Therefore, it can be concluded that James Beattie's comment on GT as "[representing] human nature itself as the object of contempt and abhorrence" is true to almost full extent. Secondary 4 2007 Term 4 Literature Essay Assignment Gulliver's Travels Question 1 Justin Chua (10) 4J ?? ?? ?? ?? Page 1 ...read more.