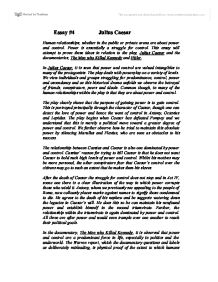 Human relationships, whether in the public or private arena are about power and control. Power is essentially a struggle for control. This essay will attempt to prove these ideas in relation to the play, Julius Caesar and the documentaries, The Men who Ki

Essay #4 Julius Caesar Human relationships, whether in the public or private arena are about power and control. Power is essentially a struggle for control. This essay will attempt to prove these ideas in relation to the play, Julius Caesar and the documentaries, The Men who Killed Kennedy and Hitler. In Julius Caesar, it is seen that power and control are valued intangibles to many of the protagonists. The play deals with powerplay on a variety of levels. We view individuals and groups struggling for predominance, control, power and ascendancy and as this historical drama unfolds we observe the betrayal of friends, conspirators, peers and ideals. Common though, in many of the human relationships within the play is that they are about power and control. The play clearly shows that the purpose of gaining power is to gain control. This is portrayed principally through the character of Caesar, though one can detect the love of power and hence the want of control in Antony, Octavius and Lepidus. ...read more.

He does this so he can maintain his newfound power and establish himself in the second triumvirate. Further, the relationship within the triumvirate is again dominated by power and control. All three are after power and would even trample over one another to reach their political goals. In the documentary, The Men who Killed Kennedy, it is observed that power and control are a predominant force in life, especially in politics and the underworld. The Warren report, which the documentary questions and labels as deliberately misleading, is physical proof of the extent to which humans will go to retain their power. The CIA or the Mafia or whoever killed John F. Kennedy were prepared to assassinate the most powerful man in the world in order to retain their power. Kennedy was against corruption as well as the Vietnam War, either of which could have been the reason for his downfall. The power of his assassins was put under scrutiny and was under threat, so to maintain it they not only killed the president but also created a monstrous cover-up. ...read more.

blasted from the earth." In the quest for power, humans can go as far as a World War and this is a great yet saddening indictment on the nature of power and control. Hitler's chief aim was to reestablish the greatness of Germany. He wanted to regain power for Germany, power over other countries. The extent to which he went, to regain this power as well as his power as a dictator, was of disastrous proportions. He is said to be, " responsible for more misery and destruction than any other man in history", and all this for power and control. He even changed Germany's political system from a democracy to a dictatorship so he could assume more control and handle more power, which he craved. In conclusion, human relations, whether in the public or private arena, are about power and control. There is no doubt that people struggle towards power in order to gain greater levels of control. In Julius Caesar, as well as the documentaries, The Men who Killed Kennedy and Hitler we observe that power and control complement each other as influential aspects in the lives of human beings. USMAN BADAR ...read more.