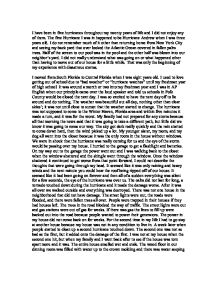 Hurricanes. I have been in five hurricanes throughout my twenty years of life and I did not enjoy any of them. The first Hurricane I was in happened to be Hurricane Andrew

I have been in five hurricanes throughout my twenty years of life and I did not enjoy any of them. The first Hurricane I was in happened to be Hurricane Andrew when I was three years old. I do not remember much of it other than returning home from New York City and seeing my back yard that over looked the Atlantic Ocean covered in fallen palm trees. Half of the screen to our pool was in the pool and the other half was blown into our neighbor's yard. I did not really understand what was going on or what happened other than having to move out of our house for a little while. That was only the beginning of my experience with disastrous storms. I moved from South Florida to Central Florida when I was eight years old. I used to love getting out of school due to "bad weather" or "hurricane watches" until my freshman year of high school. It was around a month or two into my freshman year and I was in AP English when our principle came over the loud speaker and told us schools in Polk County would be closed the next day. ...read more.

On my way out to the garage the power went out and I was walking back to the closet when the window shattered and the shingle went through the window. Once the window shattered it continued to get worse from that point forward. I could not describe the thoughts that were going through my head. It seemed like it was only raining and heavy winds and the next minute you could hear the roof being ripped off of our house. It seemed like it had been going on forever and then all of a sudden everything was silent for a few seconds, the eye of the hurricane was over us. The calm did not last for long, a tornado touched down during the hurricane and it made the damage worse. After it was all over we walked outside and everything was destroyed. There was not one house in the neighborhood that did not have damage. The street lights were out, the roads were flooded, and there were fallen trees all over. People were trapped in their houses if they had houses left. ...read more.

A tree fell into my next door neighbor's roof of their kitchen. The three hurricanes; Jeanne, Frances, and Charlie made me realize I never wanted to be in another hurricane again, not even if it meant school was going to be canceled. Unfortunately, I was. I moved to Tallahassee the summer of 2008 to attend Tallahassee Community College. The weather over the summer was rainy and there were many summer showers, some storms, but once again I was in a city where there was another hurricane warning. Living on my own made it extremely scary because I did not have the people I was closest to if the storm were to come and touch ground. I remember looking out my window and seeing the trees blowing uncontrollably and I was hoping it did not come into the window. Luckily the trees did not, but the power did go out for quite some time. All in all I have been in many hurricanes, more than most people and they are horrible storms. I do not think people realize how bad they truly are until they have experienced them first hand. I hope to have been through my share of them. ...read more.