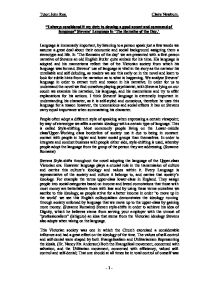 &quot;I always considered it my duty to develop a good accent and command of language&quot; Stevens' Language in 'The Remains of the Day.'

"I always considered it my duty to develop a good accent and command of language" Stevens' Language in 'The Remains of the Day.' Language is immensely important, by listening to a person speak just a few words we assume a great deal about their economic and social background assigning them a stereotype and life. In 'The Remains of the day' we are presented with a first person narrative of Stevens an old English Butler quite archaic for his time. His language is adopted and his mannerisms reflect that of the Victorian society from which his language was formed. Stevens' use of language is vital in the story as the narrator his unreliable and self deluding, as readers we see this early on in the novel and learn to look for subtle hints from the narration as to what is happening. We analyse Stevens' language in order to extract truth and reason in his narrative. In order for us to understand the novel we find ourselves playing psychiatrist, with Stevens lying on our couch we examine his narration, his language, and his mannerisms and try to offer explanations for his actions. I think Stevens' language is extremely important in understanding his character, as it is self-styled and conscious, therefore he uses this language for a reason however, the unconscious and social effects it has on Stevens carry equal importance when summarizing his character. People often adopt a different style of speaking when expressing a certain viewpoint; by way of stereotype we affix a certain ideology with a certain type of language. ...read more.

to gain such information" and get in touch with him, and so this friendship, like all the other emotional outlets Stevens discovers are unrealised or lost due to his failure with language, and the imposed ideology of detachment he has acquired through his adopted language. Another example of Stevens being unable to formulate an emotional relationship is demonstrated with Miss Kenton. His love for her is clear from the start of the novel, and despite Miss Kenton creating many opportunities for them to express their emotions for one another Stevens is utterly inept. On the night Miss Kenton enters his pantry to pursue him openly Stevens becomes 'languageless' literally, explaining "I cannot recall precisely what I said but I remember showing Miss Kenton out of my pantry quite firmly."(Ishiguro) At this point I can imagine Stevens ushering Miss Kenton out of the room unable to actually formulate words. It is clear Stevens has feelings for Miss Kenton as he can not use the detached language he adopts with her as this language carries the ideology of dignified people above primitive urges and emotions, however Stevens is feeling deeply embarrassed and harbours feelings for Miss Kenton, unfortunately for Stevens he has completely lost the ability to express his emotions due to adopting this Victorian ideology so religiously. His language restricts him, stopping him from having a relationship with the woman he loves. He has the lost the use of the ability to interact on a personal level with others due to his loss of personal, subjective language. This is demonstrated painfully when his father dies. ...read more.

it is not such a foolish thing to indulge in - particularly if it is the case that in bantering lies the key to human warmth." (Ishiguro) Conversely this could be seen as Stevens falling back into deception, he will now simply become objectified again, only this time with the skill of "bantering". Stevens has not lost his Victorian ideology as he decides to become a more desirable object for Mr Farraday, just as he had done for Lord Darlington. It is not clear, in the end, the extent to which Stevens realizes he has deceived himself, despite revealing to himself his theories of dignity, loyalty and servitude expressed the emptiness of hierarchy and therefore his own life he continues to view himself as an object. Still referring to himself as 'one' he also looks upon the task of learning to banter as "a duty" expected by an employer of a "professional" (Ishiguro) Engulfed in the Victorian ideology of hierarchy, we are left to ponder the remains of Steven' day. Unfortunately I believe we are left with the certainty that Stevens will not change, his language is still in place in the end and even the Victorian vales of hierarchy he has just exposed as causing his life to be a failure, are still in operation within his speech. His resolve to learn to banter is simply another example of this ideology working within Stevens he cannot escape the ideology of hierarchy and his idea of 'dignity' as he has given up his identity to assume the empty vessel of a serving archaic Victorian butler. ...read more.