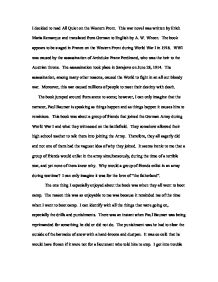 I decided to read All Quiet on the Western Front. This war novel was written by Erich Maria Remarque and translated from German to English by A. W. Wheen.

I decided to read All Quiet on the Western Front. This war novel was written by Erich Maria Remarque and translated from German to English by A. W. Wheen. The book appears to be staged in France on the Western Front during World War I in 1918. WWI was caused by the assassination of Archduke Franz Ferdinand, who was the heir to the Austrian throne. The assassination took place in Sarajevo on June 28, 1914. The assassination, among many other reasons, caused the World to fight in an all out bloody war. Moreover, this war caused millions of people to meet their destiny with death. The book jumped around from scene to scene; however, I can only imagine that the narrator, Paul Baumer is speaking as things happen and as things happen it causes him to reminisce. This book was about a group of friends that joined the German Army during World War I and what they witnessed on the battlefield. ...read more.

There was an instant when Paul Baumer was being reprimanded for something he did or did not do. The punishment was he had to clear the outside of the barracks of snow with a hand-broom and dustpan. It was so cold that he would have frozen if it were not for a lieutenant who told him to stop. I got into trouble like this when I went to boot camp. It may not have been to this great extent; however, punishment is punishment no matter how it is given. Punishment is not something that started when I went to boot camp, yet it is something that probably dates back to when armies began to train solders as a profession. The book certainly states that recruits were being reprimanded during WWI in Germany. It seemed as if Paul was always in trouble with his drill instructor Corporal Himmelstoss. ...read more.

The results of a bloody war on the Western front that Germany only gained a few miles after they initially attacked caused the solders spirit to break. The spirit of the solders was not the only loss Germany suffered, at the end of the war Germany was forced to give up some of its land and its citizens. WWI was one of the most devastating wars in the twentieth century. This book was from the eyewitness accounts of Paul Baumer. He had seen many horrifying things; in addition, he had heard sounds that could make a grown man cry. The mere fact of seeing the people that was close to him dying, I believe took a devastating toll on Paul. He knew that he could no longer function in society. He knew he had to fight, because he alone was the only fellow that remained alive. Six of his closes friends were dead. He followed them in October 1918, two years after graduating from school. Paul was only twenty years young. ...read more.