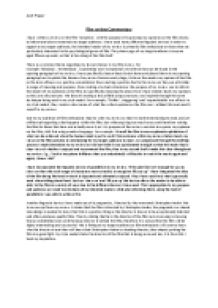 I have written a review on the film Inception, with the purpose of expressing my opinions on the film clearly, to inform and also to entertain my target audience

﻿Josh Fraser Film review Commentary I have written a review on the film ?Inception?, with the purpose of expressing my opinions on the film clearly, to inform and also to entertain my target audience. I have used many different linguistic devices in order to appeal to my target audience; the intended reader of my review is primarily film enthusiasts or those that are particularly interested in the psychological genre of film. The primary age of my target audience is anyone aged fifteen upwards, as that is the rating of the film itself. There is a common theme regarding my lexical choices in my film review. For example: ?fabulous?, ?tremendous?, ?captivating? and ?exceptional? are all lexis that can be found in the opening paragraph of my review, I have specifically chosen these lexical items and placed them in my opening paragraph as it exploits the theme of my review from an early stage, it ...read more.

yet still factual regarding what happens within the film, but without giving too much away and therefore ruining the film for those that have not actually seen it yet. My purpose of the review was also to express my opinions on the film; I did this using emotive language. For example: ?Overall the film is an exceptional exploitation of what can be achieved when the human mind is put to work? this sentence within my review states clearly my views on the film and also is entertaining for my target audience to read. As I progressed through the drafting process I made alterations to my review as I did not think it was opinionated enough so that the reader had a clear view of whether I enjoyed and recommend the film, thus in my second draft I made this clear throughout my review. ...read more.

Another linguistic device I have made use of is pragmatics, ?directed by the renowned Christopher Nolan? this is an excerpt from my review. It states that the film is directed by Christopher Nolan, the pragmatics or shared knowledge is needed to know that this Is a positive thing as the director is known to be exceptionally talented and often produces quality films. Thus by stating that he is the director of the film I am reviewing is showing that an established and world famous director is behind the film; therefore it is natural that the film will be highly entertaining and successful. This is fitting to my target audience as film enthusiasts will want to know who the director is and then will know that Christopher Nolan is a leading director; thus already putting the film in a good light. My style model states the director of the film that is being reviewed too, it is from this I took my inspiration. ...read more.