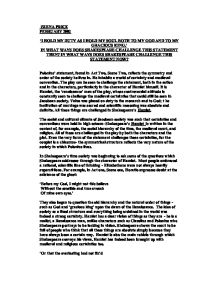 ZEENA PRICE FEBRUARY 2002 'I HOLD MY DUTY AS I HOLD MY SOUL BOTH TO MY GOD AND TO MY GRACIOUS KING,' IN WHAT WAYS DOES SHAKESPEARE CHALLENGE THIS STATEMENT THEN? IN WHAT WAYS DOES SHAKESPEARE CHALLENGE THIS STATEMENT NOW? Polonius' statement, found in Act Two, Scene Two, reflects the symmetry and order of the society he lives in. He inhabits a world of certainty and medieval convention. The play can be seen to challenge the statement, both in the action and in the characters, particularly in the character of Hamlet himself. It is Hamlet, the 'renaissance' man of the play, whose controversial attitude is constantly seen to challenge the medieval certainties that could still be seen in Jacobean society. Value was placed on duty to the monarch and to God; the institution of marriage was sacred and scientific reasoning was absolute and definite. All these things are challenged in Shakespeare's Hamlet. The social and cultural climate of Jacobean society was such that certainties and conventions were held in high esteem- Shakespeare's Hamlet is written in the context of, for example, the social hierarchy of the time, the medieval court, and religion. All of these are challenged in the play by both the characters and the plot. Even the very form of the statement challenges these certainties, for the couplet is a chiasmus- the symmetrical structure reflects the very nature of the society in which Polonius lives. ...read more.

Take thy fortune: Thou find'st to be too busy in some danger.' Polonius is clearly at home in this ordered society and shows a passive acceptance of the status quo. He has a simple medieval outlook on life and clearly values his duty to his God and king; however, he dies by ridiculous accident. Although throughout his life he has clearly endeavoured to serve these two entities to the best of his ability, he still dies an unnatural, brutal death. Shakespeare is therefore illustrating the irrelevance that these values have to life, both in Shakespeare's era and now. The statement which Polonius makes in Act Two Scene Two about duty to God and King allows the reader to infer a lot about the character of Polonius and the world in which he lives- he does not seek new experience. These medieval certainties are also challenged in the character of Claudius. He is obviously not on the side of God- indeed, he seems to contradict the very reasoning of the church by the brutal manner in which he murders the king. It is ironic therefore that he seems to declare himself king by divine right as he actually dies with a guilty conscience: 'There's such divinity doth hedge a king That treason can but peep to what it would, Acts little of his will.' Here it appears that Claudius has conveniently forgotten exactly how he became king. ...read more.

Reasoning in Medieval Denmark where the play is set nor indeed in Jacobean society is not so different to our reasoning today- the majority of people today may not believe in ghosts but characters in the play, such as Horatio, and some people in Jacobean society do not believe in ghosts either. In Act one, scene five, Hamlet makes this very thought- provoking comment to Horatio: 'There are more things in heaven and earth, Horatio, Than are dreamt of in your philosophy'. We have our certainties today- in the form of scientific reasoning; but our certainties are equally open and capable of being challenged. One of the main themes in Hamlet is death- we are still uncertain about what happens after we die. The character of Hamlet himself has a romantic, post modernist way of thinking; everything is relative and there are no certainties- only thoughts: 'Nothing is good or bad. Thinking makes it so.' In a sense here Hamlet can be compared to the Romantics. Keats wrote in the context of Shakespeare: ''Twixt damnation and impassion'd clay'. ('On Sitting Down To Read King Lear') This in a sense is what underpins Shakespeare's Hamlet- the idea that whatever certainties are held in any given era will always be questionable, and open to discussion. Our certainties will always be challenged because nothing is definite, or absolute. This romantic concept is based on the idea that this is what life is about- challenging certainties in order to try and discover the ineffable truth about this world and the next. ...read more.