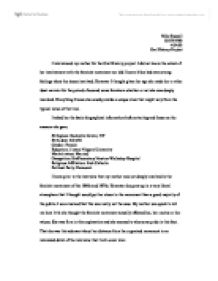 I interviewed my mother for the Oral History project.

Mike Russell 022707580 4/24/03 Oral History Project I interviewed my mother for the Oral History project. I did not know the extent of her involvement with the feminist movement nor did I know if she had even strong feelings about the issues involved. However I thought given her age she made her a rather ideal narrator for the period of second wave feminism whether or not she was deeply involved. If anything I knew she could provide a unique view that might vary from the typical views of the time. I asked her the basic biographical information before starting and these are the answers she gave. Birthplace: Rockville Centre, NY Birth date: 6/24/50 Gender: Female Education: 2 years Niagara University Marital status: Married Occupation: Staff secretary Newton-Wellesley Hospital Religious Affiliation: Irish Catholic Political Party: Democrat I knew prior to the interview that my mother was not deeply involved in the feminist movement of the 1960s and 1970s. However she grew up in a very liberal atmosphere that I thought would put her closer to the movement than a good majority of the public. I soon learned that this was really not the case. My mother was quick to tell me how little she thought the feminist movement actually affected her, her routine or her values. ...read more.

She knew that the changes that were being made were absolutely necessary and due to happen immediately but the changes were going to transpire regardless of what objective was being pursued at the time. In a sense the movement was going to happen one way or another, she just happened to dislike the crowd that was setting the wheels in motion. I may have slipped in asking a leading question as my mother finished up her thoughts on her deviation from the movement's view when I asking "Did you see the movement as being too radical?" She answered in the affirmative however she may have done so just because she wanted to see me grasping her idea (but not realizing "radical" could refer to one section of the feminist movement instead of the broader dictionary term). But if she meant radical as in simply being too extreme or excessive than this reply also shows how my mother saw the movement as too "brash". Other terms that my mother used to describe how she saw the larger movement were "dry", "boring", "sour" "just not appealing". She clarified her feelings about the people involved: "It is not that I did not respect what they (those involved with the feminist movement) ...read more.

Hence when second wave feminism picked up in America my mother was already on her way to living an independent life and making her own decisions. This is what separates her views on the people of the feminist movement and the actual changes that were being made. She was grateful and "glad it happened" however she felt she did not need a "Freidan figure" in her life to lead her along the right path. Instead of devoting time to outrage my mom saw it more beneficial to continue working her hours and awaiting change. Looking back today my mother is undoubtedly grateful for the people who devoted their lives to the fight for gender equality. But the interview concerned her views on the movement as it happened and she was clear on how she felt at the time. Distinguishing the movement from the faces that my mom saw as the representation of the organized effort is a crucial step. Living what is supposed to be the youthful prime of one's life, a concerted effort was need to protest the Vietnam War and my mother saw no need for someone to tell her freedom was something being held from her when she had grow up learning the exact opposite from her own mother. My feeling is that had my mother grown up in a different family atmosphere her involvement in the feminist movement would have probably been heavier. ...read more.