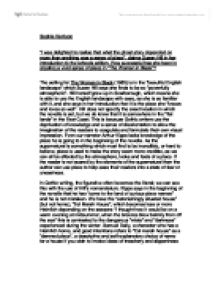 I was delighted to realise that what the ghost story depended on more than anything was a sense of place, claims Susan Hill in her introduction to the schools edition. How successful has she been in creating a vivid sense of place in The Woman in

Sophia Kerrison "I was delighted to realise that what the ghost story depended on more than anything was a sense of place", claims Susan Hill in her introduction to the schools edition. How successful has she been in creating a vivid sense of place in "The Woman in Black"? The setting for The Woman in Black (1983) is in the "beautiful English landscape" which Susan Hill says she finds to be so "powerfully atmospheric". Hill herself grew up in Scarborough, which means she is able to use the English landscape with ease, as she is so familiar with it, and she says in her introduction that it is the place she "knows and loves so well". Hill does not specify the exact location in which the novella is set, but we do know that it is somewhere in the "flat lands" in the East Coast. This is because Gothic writers use the deprivation of knowledge and a sense of disorientation to allow the imagination of the readers to coagulate and formulate their own visual impression. Even our narrator Arthur Kipps lacks knowledge of the place he is going to in the beginning of the novella. As the supernatural is something which most find to be incredible, or hard to believe, place is used to make the story seem more credible, as we can all be affected by the atmosphere, looks and feels of a place. If the reader is not scared by the elements of the supernatural then the author can use place to help ease their readers into a state of fear or uneasiness. In Gothic writing, the figurative often becomes the literal; we can see this with the use of Hill's nomenclature. ...read more.

Experiencing both attraction and repulsion are important elements of the Gothic genre; we see this in his descriptions of "Eel Marsh House" which he both "romanticises" and finds "unpleasant". Kipps also attempts to make the sublime seem beautiful, when he opens the blinds he says he has a "fine view of the sky, the marshes, the estuary" we know that this would be more of an unheimlich view than a beautiful one, and yet we can completely understand our narrators need to make it beautiful, because he seeks to comfort himself, and to rationalise the situation. Ruination is another important factor in Gothic. This is because it shows the abandonment of something or somewhere, and makes a mockery of the Enlightenment. Jennet's gravestone is ruined for a very important reason, nature always triumphs over culture in Gothic. It reads: In L . . . g Mem . . . . . .net Drablow . . . 190 . . . . . . nd of He . . . . . . iel . . . low Bor . . . This shows us the lack of care that is taken with Jennet both in life, and after her death, again suggesting that the social obsession with marital legitimacy is responsible for the way that she is. Nobody will tend to her grave out of fear of her, showing that they know she has something to be vengeful of. It also shows us that the only thing surviving on the gravestone is a lie, as Jennet's real surname was Humfrye, and not Drablow, thus showing how important legitimacy was during the nineteenth century, as even after death society would not accept that Nathaniel Drablow was born out of wedlock. ...read more.

Place is the most important factor in creating atmosphere in a story, and atmosphere is the most successful way of stirring certain desired emotions in the readers. These emotions are necessary to acquire the right reactions, for example shock in the right places, and relief where is needed. Hill is extremely good at using words to manipulate the readers. For example Arthur is at one point blindly stumbling in the dark, Hill describes the water from the marshes as lapping very closely to the edge of the path, showing the danger closing in on Arthur, and his helpless situation. This use of disorientation is extremely important in Gothic literature. "It was the suddenness of it that had so unnerved and disorientated me." Hill's use of thresholds is typical to the Gothic tradition as it presents us with a barrier to the knowledge, which as human beings, we cannot help but desperately seek. The crossing of a threshold usually makes way for new ideas and twists within the story. Thresholds are the connectors between the knowledge, which is gradually gained over the course of the story. In the beginning the character is clueless, and in denial, their mental and physical journey's will lead them to thresholds which when crossed, will grant us with some more knowledge This is shown by the nursery, which remains locked until Jennet chooses to open it. An example of this in another Gothic novel, are the locked doors in Dracula's castle which prevented Harker from gaining knowledge about Dracula. I think Hill is highly successful at creating atmosphere and a sense of fear by use of place. Word count: 2877 ...read more.