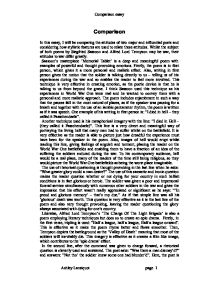 I will be comparing the attitudes of two major and influential poets and considering how stylistic features are used to relate these attitudes. The subject of both poems by Siegfried Sassoon and Alfred Lord Tennyson is war.

Comparison In this essay, I will be comparing the attitudes of two major and influential poets and considering how stylistic features are used to relate these attitudes. Whilst the subject of both poems by Siegfried Sassoon and Alfred Lord Tennyson may be war, their attitudes to war differ greatly. Sassoon's masterpiece 'Memorial Tablet' is a deep and meaningful poem with examples of powerful and thought provoking emotions. Firstly, the poem is in first person, which gives it a more personal and realistic effect. Also, writing in first person gives the notion that the soldier is talking directly to us - telling us of his experiences during the war and so enables the reader to feel more involved. This technique is very effective in creating emotion, as the poetic device is that he is talking to us from beyond the grave. I think Sassoon used this technique as his experiences in World War One were real and he wanted to convey them with a personal and more realistic approach. The poem includes enjambment in such a way that the pauses fall in the most natural of places, as if the speaker was pausing for a breath and together with the use of an iambic pentameter rhythm, the poem is written as if it was speech. ...read more.

This is very effective as it shows the soldiers as gullible, innocent and submissive, magnifying their heroism and patriotism. This is further magnified when the poet says: "Their's not to make reply, Their's not to reason why, Their's but to do and die..." Here through repetition, the poet is showing that they had no choice and even if they did, they would still follow orders, as they were true patriots and had complete trust and faith in their officers, even if it meant laying their lives on the line. In the third verse, personification is used in conjunction with metaphors describing the soldiers' entry into the battleground: "Into the jaws of Death, Into the mouth of Hell". Giving these metaphors human characteristics as well as capitalizing their first letters, brings the battleground to life, creating emotive images in the mind of the reader. By using the 'jaws' and 'mouth' of Hell, Tennyson gives the impression that the soldiers are naively galloping into an abyss where they will be devoured. Specifically, he is saying they are killing themselves by following through with the order to charge yet again the suggestion is tempered by the dramatic imagery. ...read more.

Where he seems to be greatly pro-war and sees dying for his country the most glorious thing a man can do, the underlying tone is of irony and sarcasm, creating doubt in the readers' minds and causing them to question the logic behind stating death is noble. My opinion of war is that it should always, in any situation be used as a very last resort. Abusing power and military strength as numerous superpowers have done in the past, and are doing today, is unjust, especially when the country being persecuted is in a state of poverty and national despair. In the past, wars have been fought for no common, just reason, such as the Korean war, where the Americans and the Soviets were involving themselves on opposite sides of a war which shouldn't have been fought in the first place, just so they could indirectly defeat one another and spread their own political beliefs. In my opinion, war should only be decided upon if two rules have been adhered to: only government states should be able to fight a war, which excludes terrorist organisations and political parties not in power, and that war can only be fought in the name of a just, common cause, voted for by members of international organisations such as the United Nations. Comparison essay Ashley Lansiquot page 1 ...read more.