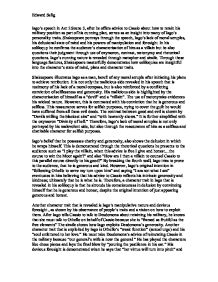 Iagos speech in Act 2 Scene 3 serves as an insight into many of Iagos personality traits, his lack of moral scruples, his delusional state of mind and his powers of manipulation and foresight.

Iago's speech in Act 2 Scene 3, after he offers advice to Cassio about how to retain his military position as part of his cunning plan, serves as an insight into many of Iago's personality traits. Shakespeare portrays through the speech, Iago's lack of moral scruples, his delusional state of mind and his powers of manipulation and foresight. In his soliloquy he confirms the audience's characterisation of him as a villain but he also questions their judgment through use of oxymoron, contrast, metonymy and rhetorical questions. Iago's cunning nature is revealed through metaphor and simile. Through these language features, Shakespeare masterfully demonstrates how soliloquies are insightful into the character's state of mind, plans and character traits. Shakespeare illustrates Iago as a man, bereft of any moral scruple after initiating his plans to achieve retribution. ...read more.

Iago's belief that he possesses charity and generosity, also shows the delusion in which he wraps himself. This is demonstrated through the rhetorical questions he presents to the audience such as "I play the villain, when this advice is free I give and honest...the course to win the Moor again?" and also "How am I then a villain to counsel Cassio to this parallel course directly to his good?" By breaking the fourth wall, Iago tries to prove to the audience, that he is generous and kind. However, Iago's original intention in "following Othello to serve my turn upon him" and saying "I am not what I am" eventuates in him believing that his advice to Cassio reflects his intrinsic generosity and kindness; ultimately that he is what he is. ...read more.

He has played the characters like chess pieces and lays the final blow by "pouring the pestilence in his ear." His devious foresight is demonstrated when he says that "her virtue will turn into pitch" and that he will "make the net that shall enmesh them all." The metaphors show Iago as the agent saboteur, how he systemically places his pieces where he wants on the board, and then entangles them all. Therefore, the soliloquy shows Iago's manipulative nature and foresighted view. In conclusion, Iago's soliloquy in Act 2 Scene 3 embodies him as a man with no moral compass, a tenuous grip on the realities of life and his manipulative nature. Shakespeare shows how soliloquy gives the audience a clear insight into Iago's mind. We see that the original intentions of revenge against Othello become more personally attached, from the military to adultery, Iago' mental state degenerates into mild insanity. ?? ?? ?? ?? Edward Selig ...read more.

There is some good, focused analysis in this essay, demonstrating close reading. As the essay is analysing one speech only, there is opportunity to explore more, such as use of verse, register of lexis, phonological features, syntax, caesura etc. The writer's suggestion that Iago believes himself to be charitable and generous is not really supported by the text, although they do attempt to offer evidence to support this view. It is important to read carefully and closely to ensure tone and meaning of the words are understood.