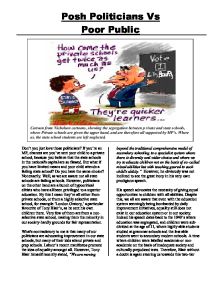 If Labour really did care about education, and equality as they put it, why are they segregating students from state schools to selective state schools?

Posh Politicians Vs Poor Public Don't you just love those politicians? If you're an MP, chances are you've sent your child to a private school, because you believe that the state schools in the national's capital are so flawed. But what if you have limited means and your child attends a failing state school? Do you have the same choice? Not exactly. Well, as we are aware not all state schools are failing schools. However, politicians on the other hand are a bunch of hypocritical elitists who have all been privileged to a superior education. By this I mean they're all either from private schools, or from a highly selective state school, for example 'London Oratory,' a particular favourite of Tony Blair's, as he sent his own children there. Very few of them are from a non-selective state school, making them the minority in our society-hardly grounds for fair representation. What's contradictory to me is that many of our politicians are advocating improvement in our state schools, but many of their kids attend private and prep schools. Labour's recent manifestos promote the idea of equality amongst all. However, Tony Blair himself recently stated, "We are moving beyond the traditional comprehensive model of secondary schooling to a specialist system where there is diversity and wider choice and where we try to educate children not on the basis of so-called mixed abilities but with teaching geared to each child's ability." ...read more.

They have a contradictory dogma, where to win votes their aspiration turn to working and middle class citizens, but when it comes down to the crunch time, their benefits are only beneficial to high paid professionals and money making moguls, which in many cases contribute cash to buy titles such as 'knighthoods.' This is all done just so that Labour, as a party, and its crusade for educational segregation can be sponsored financially. It's not surprising why many private school and selective school students are now politicians, as it's necessary to maintain the status quo and social injustice and discrimination. Many politicians win votes, by repeating the need to constantly improve and reform the education system, and at the same time admiring selective and private schools. Yet they're all part of this bottomless pit full of irrational politicians. A prime example, being the former secretary of education, Ruth Kelly. She claimed that her child, was not achieving a good education in the state sector, and therefore sent him to a private school. Now what do we call that? Altogether now, 'H' spells 'Hypocrisy.' This shows the line of segregation, runs deep where the posh become politicians, and the poor public citizens are in the background with an unequal access to qualifications and with limited choice. ...read more.

Well it's either few state school graduates have ever applied to be an MP, which is absolutely absurd, or its labour, constantly putting them down in order to build a posh private political parliament. Whether we call it hypocrisy or absurdity, it's not the government or current politicians who suffer. It's the poor souls of state school students, who have worked double as hard as private school students. However when it comes down to selecting a candidate to join the cabinet, it's always the state schools that are hammered down. By this I mean, state school students are always the last resort. Now what are our views on politicians? Well simple, they are all a bottomless pit of aristocratic hypocrites! If we want a parliament that really does represent the people then this must change. Either a new education system is established, so that there is no segregation amongst schools or the constant discrimination towards state comprehensive graduates is put to a stop! Politicians, government, MP's and party's, must stop the discrimination, and the segregation amongst schools, and become united. They need to show that they are part of a democratic society, and not just a bunch of selfish arrogant mongrels. Stop neglecting the state schools, and let us not prioritise between our students. Education is an Esential dynamic aspect that assents humanity to subsist, and therefore segregating it, will only divide a democratic nation. Chandni Jounija Word count: 1,383 ...read more.