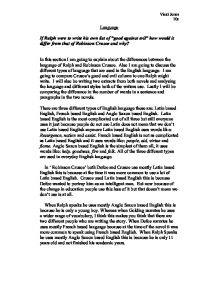 If Ralph were to write his own list of &quot;good against evil&quot; how would it differ from that of Robinson Crusoe and why?

When Ralph Speaks he uses mostly Anglo Saxon based English this is because he is only 11 years old and not finished his academic years. Ralph uses a lot of slang, like most boys his age do. He uses words and phrases such as: "sucks to your ________" "Gosh" "Smashing" "Wacco" "Doink" "Golly" "Bong" Whereas Robinson Crusoe's language is much more complex with words like: "Expostulating" "Vicissitudes" "Precipitate" "Elopement" In both of the novels they are both very different because in 'Robinson Crusoe' Defoe writes sentences that could be a paragraph now and Golding's sentences are much shorter than Defoe's here are some examples I found: Words per paragraph Words per sentence 'Lord of the Flies' 104 23 'Robinson Crusoe' 311 56 As you can see there is a big difference between both of the columns this is because at the time of 'Robinson Crusoe' people wrote longer sentences and paragraphs than they do now. You could say we are the lazier generation. If Ralph were to write his own good and evil columns it would probably read like this: Good Evil I have crashed on an island Luckily I have survived and With no grownups to look have many other boys with After me me too. ...read more.

' "This is real exploring," said Jack "I bet no one has been here before." "We ought to draw a map," said Ralph "only we have no paper." "We could make scratches on the bark" said Simon "and rub black stuff in it." Again came the solemn communication of shining eyes in the gloom. "Wacco!" "Wizard!" In this extract we can clearly see the difference between the boy's language and Geldings. We can see that the boys use much more simpler language than Gelding for example Golding uses words like 'solemn'. Whereas the boys use much more simpler language such as ''rub' and 'stuff'. I think this is because Golding wanted to emphasise the fact that they were only young boys and they could be capable of such things so Golding chooses language that the boys use because they don't know any better and they are innocent and he wanted to emphasise that the boys are only young and have done these unspeakable acts. In conclusion the language has two mane factors as to why they differ so much, these are: the time period they novels were both set and the age difference. Vicki Jones 10s ...read more.