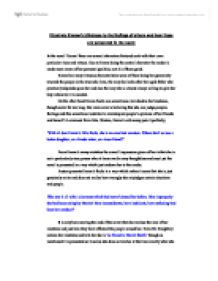 Illustrate Emma's blindness to the feelings of others and how these are presented in the novel.

Illustrate Emma's blindness to the feelings of others and how these are presented in the novel In the novel 'Emma' there are several characters featured each with their own particular vices and virtues. Due to Emma being the central character the reader is made more aware of her personal qualities, not all of them good. Emma has many virtuous characteristics some of them being her generosity towards the people in the town she lives, the way she looks after her aged father who practically depends upon her and also the way she is almost always willing to give her help whenever it is needed. On the other hand Emma faults can sometimes over shadow her kindness, though never for too long. Her main error is believing that she can judge peoples feelings and this sometimes leads her to misinterpret people's opinions of her friends and herself. A comment from Mrs. Weston, Emma's old nanny puts it perfectly, 'With all dear Emma's little faults, she is an excellent creature. ...read more.

Elton to Harriet as a suitor was because she believed him to be the very person 'for driving the young farmer (Mr. Martin) out of Harriet's head' when Emma thought she could do much better for her. For Emma this train of thought is perfectly natural for her so she really cannot be blamed for her personality or in general the way she is. The whole situation back fires on her when Harriet believes herself to have fallen in love with Mr. Elton whose true affections lay else where. 'If I had not persuaded Harriet into liking the man, I could have borne anything'.....(Emma's thoughts to herself) How could she be so deceived!.....She had taken up the idea, she supposed, and made everything bend to it.' This is after Mr. Elton had just declared his love for Emma on the way back from an evening out and he does not see how she could have mistaken his affections for being towards Harriet when instead they were aimed towards her. ...read more.

Knightley. Probably because he seems to be the only person she will listen too. 'How could you be so unfeeling to Mrs. Bates? How could you be so insolent in your wit to a woman of her character, age, and situation? - Emma, I had not thought it possible' After which she immediately regrets what she has said but yet again it only occurred through another moment of her not thinking before she's spoken. This is yet another blindness of Emma's however as there is a reason behind the fact she respects Mr. Knightley's opinion and that is because she loves him but does not realise this until she inadvertently advises her friend Harriet that he would be an ideal suitor. Overall Emma is presented as having her friend's best interests at heart but not quite being right on certain aspects, she is also shown as being slightly thoughtless at times but not meaning to be in a cruel way. However to Emma's defence she does learn from her mistakes and everything ends as it should do it the novel, with all young couples happily paired off and soon to married. ...read more.