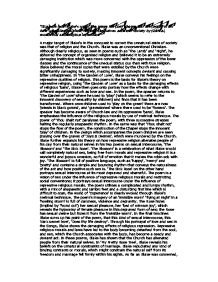 &quot;Illustrate from Blake's songs the ways the poet shows that the people of his time were alienated from their natural selves and from society by political, economical and religious repression&quot;.

"Illustrate from Blake's songs the ways the poet shows that the people of his time were alienated from their natural selves and from society by political, economical and religious repression" A major target of Blake's in the conquest to correct the unnatural state of society was that of religion and the Church. Blake was an unconventional Christian. Although clearly religious, as seen in poems such as 'The Lamb' and 'Night', he abhorred the concept of organised religion and believed it to be an extremely damaging institution which was more concerned with the oppression of the lower classes and the continuance of the unequal status quo than with true religion. Blake believed the moral codes that were extolled by the Church were significantly damaging to society, making innocent concepts deviant and causing bitter unhappiness. In 'The Garden of Love', Blake conveys his feelings on the repressive qualities of religion. This poem is the basis for Blake's theory on repressive religion, using 'The Garden of Love' as a basis for the damaging effects of religious 'bans', Blake then goes onto portray how the effects change with different experiences such as love and s*x. In the poem, the speaker returns to 'The Garden of Love' where he used to 'play' (which seems to refer to the innocent discovery of sexuality by children) ...read more.

In the poem, a 'flower was offered' to the speaker, a metaphor for an extra-marital affair, by a woman which the speaker finds attractive ('Such a flower as May never bore'). However, the unnatural constraints of marriage cause the speaker to unhappily, suggested by the slowing of the rhythm with a double stress in 'And I passed the sweet flower o'er', turn down the offer and return to his wife, his 'Pretty Rose tree'. The artificial boundaries of marriage have led to the speaker giving up the chance of being happy with his 'sweet flower' and to being trapped with his jealous 'Rose tree' whose 'thorns' are his 'only delight'. Blake suggests that without the constraints of marriage that the speaker would have been free to follow his heart, rather than conforming to an artificial law and becoming unhappy. In 'London', Blake further expresses his attitude towards marriage. In the poem, marriage is presented as a 'hearse', a vessel for carrying the dead, though with their bodies (their s****l selves) being dead in a loveless and institutionalised marriage which extols the virtues of the soul over the deviant and depraved body. Blake blames the unnatural state of love in society on the Church's separation of body and soul. The separation has forced the soul to be encapsulated in marriage and the body to be forced to become deviant and turn to 'youthful Harlots'. ...read more.

The poem's speaker is outraged to find an impoverished young sweep and seeks someone to blame for his condition. The poem itself is a pitiful tale of oppression, the child has been sold into slavery as a sweep by his parents who have had their guilt absolved by the 'church'. This poem is a scathing attack on the organised 'Church' and the apparatus in society which are designed to maintain the status quo of oppression, 'God and His priest and king'. The sweep is certain that the various institutions of society have colluded in a hypocritical lie, they 'make up' a heaven where there is only 'misery'. However, the sweep himself is seen as an apparatus in his alienation from his natural self, he is seen to be 'happy and dance and sing' by his parents who see that he is happy and are therefore not guilty. As in 'The Chimney Sweeper' of Innocence the sweep is completely ignorant of another choice, his choice to not be a sweep, it is simply accepted as his life. The social institutions complicit in his slavery have such a repressive grip on society that their thoughts are constrained in 'mind-forged manacles', unable to consider a radically different system. Therefore, the sweep is completely alienated from his natural self, his life is constrained and so is his mind by repressive political and economic forces. ...read more.