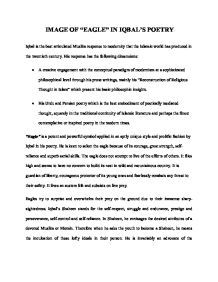 IMAGE OF "EAGLE" IN IQBAL'S POETRY Iqbal is the best articulated Muslim response to modernity that the Islamic world has produced in the twentieth century. His response has the following dimensions: * A creative engagement with the conceptual paradigm of modernism at a sophisticated philosophical level through his prose writings, mainly his "Reconstruction of Religious Thought in Islam" which present his basic philosophic insights. * His Urdu and Persian poetry which is the best embodiment of poetically mediated thought, squarely in the traditional continuity of Islamic literature and perhaps the finest contemplative or inspired poetry in the modern times. "Eagle" is a potent and powerful symbol applied in an aptly unique style and prolific fashion by Iqbal in his poetry. He is keen to select the eagle because of its courage, great strength, self-reliance and superb aerial skills. The eagle does not attempt to live of the efforts of others. It flies high and seems to have no concern to build its nest in wild and mountainous country. It is guardian of liberty, courageous protector of its young ones and fearlessly combats any threat to their safety. It lives an austere life and subsists on live prey. Eagles try to surprise and overwhelm their prey on the ground due to their immense sharp-sightedness. Iqbal's Shaheen stands for the self-respect, struggle and endurance, prestige and perseverance, self-control and self-reliance. ...read more.

In Iqbal's view, in fact, the Muslims have acquired the ways of the vulture, the kargas, with which Iqbal often contrasts the shahin, signifies, in Iqbal's poetry, not so much greed or rapacity, as it would in English, but baseness of stock, lowness of ambition, and parasitic attitudes. Iqbal tells them to go back to their roots and become eagles again in Bal-i-Jibril, where Iqbal, alluding to Muslims, remarks that they have been corrupted by their association with ravens, and Zabar-i-Ajam which is similar. "You are the eagle of Muhammad," says Iqbal, addressing the Muslim, "and angels and houris are your prey". In "The Philosopher," Iqbal points out the limitations of philosophical thought. For all its achievements, philosophy has not yielded definitive and reliable guidance on issues of fundamental importance to man. The philosopher is the vulture that flies around in space like an eagle, but unlike the eagle, fails to catch live prey. In Payam-i Mashriq, "The wings of a nightingale are of one kind, those of an eagle of another"; and in a slightly different context, in Javid Namah, the truly religious are contrasted with the shallow and unscrupulous pretenders to religiosity. What distinguishes the eagle from the other birds is its sharp vision, its ability to soar into the air and rule the skies, its swift movement, its daring nature and love of freedom. ...read more.

Although it had occasionally been used before Iqbal to express quasi-philosophical notions, such use had more to do with mood than with thought. The ghazal, that is to say, might reflect a mood, usually sombre and melancholic, another respect in which Iqbal's ghazal is different, that passed from philosophical seriousness and fanciful musings to weighty thought. Iqbal effectively redefined, at least for his own purposes, the ghazal, using it to treat a variety of serious subjects and his use of the genre to talk about the eagle should be seen in that larger context. "The Eagle," highlights the "ascetic" and freedom-loving nature of the eagle: "Mine is the boundlessness of the blue sky!" The eagle shuns the pleasurable but enervating life of the garden, preferring the austere but wholesome environment of the desert. The second poem, "Beyond the Stars" is an exhortation to the eagle to discover new worlds by soaring ever higher- "Do not be content with the world of colour and smell: There are other gardens, and other nests, too". Iqbal's addressee here is evidently an eagle that has lost its nest and Iqbal consoles it by saying that there are realms yet to be explored and conquered. "An Eagle's Advice to Its Young One," is the most complete portrait of the Iqbalian eagle, and deserves special attention from the readers. "Live in the world like an eagle, and like an eagle die," says Iqbal in Javaid Nama. An understanding of the eagle motif in Iqbal's poetry thus becomes essential to understand Iqbal's thought and message. ...read more.