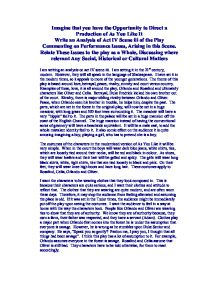 Imagine that you have the Opportunity to Direct a Production of As You Like It.

Imagine that you have the Opportunity to Direct a Production of As You Like It Write an Analysis of Act IV Scene iii of the Play Commenting on Performance Issues, Arising in this Scene. Relate These Issues to the play as a Whole, Discussing where relevant Any Social, Historical or Cultural Matters I am writing an analysis on act IV scene iii. I am setting it in the 21st century, modern. However, they will all speak in the language of Shakespeare. I have set it in the modern times, so it appeals to more of the younger generations. The theme of this play is based around love, betrayal, peace, rivalry, enmity and court versus country. Examples of these, love, it is all around the play, Orlando and Rosalind and ultimately characters like Oliver and Celia. Betrayal, Duke Fredrick kicked his own brother out of the court. Rivalry, there is major sibling rivalry between Orlando and Oliver. Peace, when Orlando seen his brother in trouble, he helps him, despite the past. The parts, which are set in the forest in the original play, will now be set in a huge meadow, with long grass and 500 foot trees surrounding it. The meadow will have a very "hippie" feel to it. The parts in the palace will be set in a huge mansion off the coast of the English Channel. The huge mansion instead of having the conventional acres of greenery will have a beachside equivalent. It will be a male cast, to add the whole mistaken identity feel to it. ...read more.

I decided on setting the play in modern times as I felt that people our age would feel more like watching it if it was set nowadays. Also in this play social status plays quite a major part, so by setting it in the modern times, it might help people see that even in these modern times, social status still does matter. However, despite the fact that this play will be set in the modern times, I am going to make status a point. I myself have distinguished between the court and the country. The people of the court have decent clothes, like Duke Fredrick and the courtiers, are all wearing good clothes. Whereas, characters like Phebe and Silvius are all wearing clothes that people nowadays would laugh at if they were seen in public. But, the people who do not do very flattering jobs for the court are still wearing clothes that do make people look down on them. Touchstone for example, is part of the Court, but works for them, not giving him as much status. In films today it is strange to not see a female in it, so this might appeal more to the audience to see something as rare as this. Rosalind has a very tough time. Hearing the news about Orlando being injured pushed her over the edge, causing her to faint. She had many things on her plate for example, she is in love with Orlando, and he professes his love for her, unaware that Ganymede is her. On top of all of this, a girl called Phebe likes her. ...read more.

Evidence of things like love in this play, is extremely overt. Firstly, you have Rosalind, she is in love, does not know how to express it. This will have a comical effect on the audience, especially if her inability to articulate her feelings causes her to be frustrated. Orlando, loves Rosalind, but is hiding in the forest. He expresses himself through a series of cheesy poems written about his love. This again, makes it funny for us, the audience. Phebe, is in love with Rosalind expresses it through a letter, but alas, she is a girl. The mistaken gender situation gives humour again. Silvius, in love with Phebe, cannot profess his love for her, due her loving Rosalind. With betrayal, it is not as blatant as love, however it is still there. Duke Fredrik was disloyal to his own brother. He usurped the throne from him. With Orlando and Oliver, family loyalty is broken. Oliver has been disloyal, he promised his father he would take care of the family. Oliver betrayed his father by not doing what he promised. Jealousy comes into it - Orlando has to sleep in terrible conditions, has not got all the privileges are Jacques and Oliver. He is envious of them, they are also rivals, he wishes he could be them. However, in the end, Orlando and Oliver make peace, and everything is all right between them. This play goes through a range of emotions, which makes it very interesting and entertaining for us, the reader. The court versus country bit, is all around the play, it is associated in the costumes, where they live, how the talk, everything. However, in the play it is obvious as, as soon as Orlando reaches the forest, he assumes everyone there is savage. ...read more.