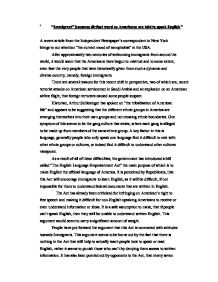 i "Immigrant" becomes dirtiest word as Americans are told to speak English" A recent article from the Independent Newspaper's correspondent in New York brings to our attention "the current mood of xenophobia" in the USA. After approximately two centuries of welcoming immigrants from around the world, it would seem that the Americans have begun to mistrust and to some extent, even fear the very people that have historically given them such a dynamic and diverse country, namely, foreign immigrants. There are several reasons for this recent shift in perspective, two of which are, recent terrorist attacks on American servicemen in Saudi Arabia and an explosion on an American airline flight, that foreign terrorists caused some people suspect. ...read more.

It is perceived by Republicans, that this Act will encourage immigrants to learn English, as it will be difficult, if not impossible for them to understand federal documents that are written in English. The Act has already been criticised for infringing on American's right to free speech and making it difficult for non-English speaking Americans to receive or even understand information or ideas. It is a safe assumption to make, that if people can't speak English, then they will be unable to understand written English. This argument would seem to carry a significant amount of weight. People have put forward the argument that this Act is connected with attitudes towards Immigrants. ...read more.

This argument seems to be borne out further by another piece of Republican proposed legislation, the welfare reform Bill. One provision of this Bill would be that, immigrants who are in America quite legally, but are not yet citizens, would not be eligible for state welfare benefits, yet another form of "immigrant bashing" some might say. Hot button as mentioned in the article; a controversial thing of the moment, it is a happening now situation. Enduring canard, a lasting ongoing issue, to accept with a certain amount of tolerance regarding political correctness, in this case a probability that it has come about in the course of sensationalism and c**k-and-bull story of this report in America's newspapers. Polyglot America Speaking, reading and writing many different languages, in this case America. i Communication Skills Assignment 1 Sue Allen. ...read more.