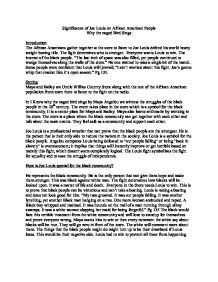 Importance of Joe Louis in The Caged Bird

Significance of Joe Louis on African American People Why the caged Bird Sings Introduction The African Americans gather together at the store to listen to Joe Louis defend his world heavy weight boxing title. The fight determines who is stronger. Everyone wants Louis to win. The interest of the black people. "The last inch of space was also filled, yet people continued to wedge themselves along the walls of the store." No one wanted to miss a single bit of the match. Some people were confident that Louis will prevail, "I ain't worried about this fight. Joe's gonna whip that cracker like it's open season." Pg 135. Setting Maya and Bailey are Uncle w*****s Country Store along with the rest of the African American population from town there to listen to the fight on the radio. In I Know why the caged bird sings by Maya Angelou we witness the struggles of the black people in the 20th century. The event takes place in the store which is a symbol for the black community. It is a center place for Maya and Bailey. Maya also learns arithmetic by working in the store. The store is a place where the black community can get together with each other and talk about the main events. ...read more.

He had become the strongest man in the world. Does the god help the black community? Maya says that "God himself hated us and ordained us to be hewers of wood and drawers of water." (pg 135) Joe is down and he's almost about to lose. But he gets up in and is mad. God gives him strength and the ability to fight back. He fulfills the prayers of the black community. God helps people who have done good deeds. How does Maya describe the black people? Maya thinks "That all black people are stupid and ugly and lazy and dirty and unlucky." (pg 135) We can also see that the author creates a somber and a depressed atmosphere. What lessons can the white people learn from this defeat? They can see that black people are not weak and would be a little more careful with them. When Joe catches Carmera he "Hits him on the right to the head and another left to the head" In my point of view, here Joe gets punches his brain and tries to damage. So whenever he Carnera will think anything against he'll remember the beating he got from Joe (a black) did to him. So this will prevent him from thinking negative thoughts from his mind. ...read more.

A Black boy whipped and maimed. It was hounds on the trail of a man running through slimy swamps. It was a white woman slapping her maid for being forgetful." Pg 135 The black would receive more negative treatment if Joe lost. With his win the black had strength of hope and pride. They were proud of the fact they were strong. If this passage wasn't in the play they wouldn't be able to prove the white people anything. This also changes the way black people thought about themselves. It brings that if it wasn't for Joe the younger generation would have no black inspirations or people to look upon to in their community. This passage brings the community together and changes the views of black people themselves. Conclusion: Maya Angelou brings out the aspects beyond those of a young girl's private thoughts through real events. This victory in the eyes of the black community became an example of the white man's media failing to publicly recognize an African American as a hero. In the eyes of African Americans Joe Louis represented racial pride and was a role model who helped the people of Stamps to ease from their struggles from the white. Joe Louis's victory is an empowering disagreement of the negative stereotypes that were in the African Americans. When the African Americans acquired public praise, role models and heroes such as Joe Louis became the strength for the black community. http://forum.divxplanet.com/index.php?showtopic=65187 www.asts.net www.bergaila.com ...read more.