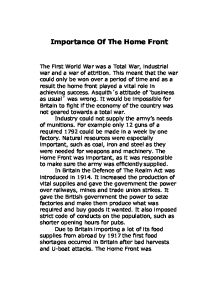 Importance Of The Home Front

Importance Of The Home Front The First World War was a Total War, industrial war and a war of attrition. This meant that the war could only be won over a period of time and as a result the home front played a vital role in achieving success. Asquith�s attitude of 'business as usual� was wrong. It would be impossible for Britain to fight if the economy of the country was not geared towards a total war. Industry could not supply the army's needs of munitions. For example only 12 guns of a required 1792 could be made in a week by one factory. Natural resources were especially important, such as coal, iron and steel as they were needed for weapons and machinery. ...read more.

In 1917, the government introduced rationing, made more land used for cultivation and people were encouraged to grow their own foods at home or on allotments. Two agriculture acts were introduced allowing the production of vital food supplies, such as corn to increase. The Home Front was responsible in encouraging men to sign up for the Kitcheners Volunteer Army using propaganda. When the army needed more men the government introduced conscription in 1916. Propaganda campaigns were used and the army rose to 3-4 million as a result. A problem faced at the Home Front was the lack of labour caused by men going to the front to fight. Factories had few workers and therefore vital supplies, such as munitions and coal dropped. ...read more.

During the war Britain had to employ several measures to increase finance. Income tax and duties on luxury imports were put up. People were encouraged to buy war bonds from the state. The main way Britain paid for the war was to sell off its many overseas assets such as its railways in America. It is quite clear that the excellent way in which the Home Front was managed played a crucial part in winning the war for the allies. Britain made sure that it had an advantage with the Sinews of war and geared its economy quickly and efficiently towards war. New war ministries such as Ministries of Agriculture and Munitions were introduced and plans were made to encourage men to join the army. People at home were kept happy. Without the work done at the Home Front the other fronts and especially the Western Front couldn't have been supported. ...read more.