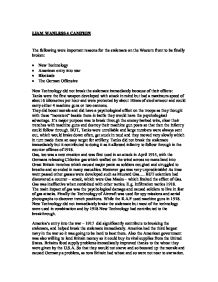 Important reasons how the stalemate on the Western front was finally broken.

LIAM WANLESS 4 CAMPION The following were important reasons for the stalemate on the Western front to be finally broken: * New Technology * American entry into war * Blockade * The German Offensive New Technology did not break the stalemate immediately because of their effects: Tanks were the first weapon developed with attack in mind but had a maximum speed of about 6 kilometres per hour and were protected by about 10mm of steel armour and could carry either 4 machine guns or two cannons. They did boost morale and did have a psychological effect on the troops as they thought with these "monsters" beside them in battle they would have the psychological advantage. It's major purpose was to break through the enemy barbed wire, clear their trenches with machine guns and destroy their machine gun posts so that then the infantry could follow through. BUT, Tanks were unreliable and large numbers were always sent out, which would brake down often, get stuck in mud and they moved very slowly which in turn made them an easy target for artillery. ...read more.

It signalled the end of the unrestricted submarine activity it also caused huge losses of morale to Germans and signalled the end of Britain being 6 weeks from disaster. Also Germany still had to face a British Blockade, as well as prepare for 1918 and an extra 250,000 U.S.A soldiers per month, as well as fresh enthusiastic, fully equipped U.S.A soldiers. Which put Germany under a lot of pressure and forced them to consider new options. The U.S.A navy was important too as not only was it the third largest navy in the world but its destroyers could now be used on convoy duty to protect merchant shipping routes between Britain and United States. Also the entry of the U.S.A into the world increased the number of warships available to defend the convoys and so more U- boats were sunk. Blockade almost broke the stalemate when the Germans launched unrestricted submarine activity for the second time and had destroyed so many merchant ships that there were food supplies for only another six weeks. The British Blockade also came close to breaking the stalemate on the western front as it caused 300,000 deaths which were related to malnutrition, it ...read more.

Haig even issued an order to "fight to the last man". In a sense Germans had broken the stalemate as in June 1st 1918 they were just 37 miles from Paris and came very close to splitting the allied forces. However General Foch managed to halt the advanced at the battle of Marne, of costs to Germany, as the advance was swift and effective... BUT produced a massive salient, which was 80 miles long and 40 miles deep. Also it was isolated from the left of the forces, difficult to supply and so the middle of the line of advance was the weakest and so many German forces were exhausted. But with this they created their own paradox: As it could be said "the Germans had a very successful result in their failure" as it provided weakened positions for the allies to exploit. But with this we must not leave out the weapons such as Tanks and aircraft's that were used during the offensive and so contributed to helping the offensive of 1918 along with New Technology, American entry into war and Blockade being important reasons why the stalemate on the Western Front was finally broken. ...read more.