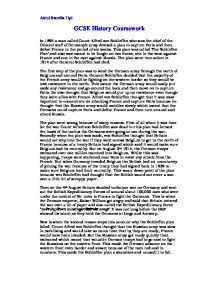 In 1895 a man called Count Alfred von Schlieffen who was the chief of the General staff of Germany's army devised a plan to capture Paris and then defeat France in the period of six weeks.

Abdul Bismilla 11pl GCSE History Coursework In 1895 a man called Count Alfred von Schlieffen who was the chief of the General staff of Germany's army devised a plan to capture Paris and then defeat France in the period of six weeks. This plan was called 'The Schlieffen Plan' and also was meant to be fought on two fronts, one in the west against France and one in the east against Russia. The plan went into action in 1914 after General Schlieffen had died. The first step of the plan was to send the German army through the north of Belgium and around Paris. General Schlieffen decided that the majority of the French army would be fighting on the western border so they would be less resistance in the north. This meant the German army would easily put aside any resistance and go around the back and then move on to capture Paris. He also thought that Belgium would put up no resistance even though they were allies with France. Alfred von Schlieffen thought that it was most important to concentrate on attacking France and capture Paris because he thought that the Russian army would mobilise slowly which meant that the Germans could capture Paris and defeat France and then turn around and attack Russia. ...read more.

Sometime there masks were worn in their own trenches incase one of the gas shells being fires back fired back into their own trench. The machine gun was another new weapon that the army's used. These could fire up to 600 rounds (bullets) per minute. Now, if the enemy tried to rush out onto no mans land they could face a heavy loss of life because the machine gun would be put into operation and no matter how huge the attack was on no mans land, a few 100 machine guns could do more than enough damage to the enemy. The aircraft was also used as well. These did come into some use because they were sent over the enemy lines to spy on what or what kind of attack was prepared next. As I mentioned earlier before the aircraft helped more to do with getting prepared for attacks and hardly ever helped to attack the enemy lines. Also both sides were well supplied, and could also bring and call up men and also new weapons. Advancing troops couldn't hold on to the land which they had just won for more then 15 minutes because they were always pushed back. Also the conditions in the trenches were appalling at times. ...read more.

The Germans surrended because this operation was the last straw of the war for them. It was in 1918 in the last few months of the war the Germans fought a desperate regarded action. By September they had been pushed back across the Hindenburg line among the strongly for fitted German trenches. Also back at home the German population were starving. Then in March the revolutionists took control over the government and at then at the end of October the navy demilitarised and also some soldiers on the western front laid down their arms too. As Germany's Allies surrended there was no more it could do apart from to give in themselves. Then at 11 a.m on the 11th of November, 1918 an armistice was signed ending the war. I think that firstly if America never entered the war the Allies, Britain and France would have lost the war because the Russians dropped out anyway which meant that the German army would be together again in full force on the western front. Also if the tank was not bought in the war it would have been hard for the allies to break through the German lines. Blockading the German ports was also important because this meant Germany had no more fresh supplies of men or weapons. Overall I think all the reasons which I have mentioned are all equal to why the stalemate was finally broken. ...read more.