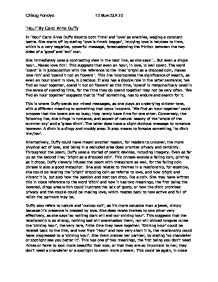 In Hour Carol Anne Duffy depicts both time and love as enemies, waging a constant battle.

'Hour' By Carol Anne Duffy In 'Hour' Carol Anne Duffy depicts both 'time' and 'love' as enemies, waging a constant battle. She starts off by stating 'love is time's beggar', implying love is helpless to time, which is a very negative, powerful message, foreshadowing the friction between the two sides of a 'good' and 'evil' war. She immediately uses a contrasting view in the next line, as she says '...But even a single hour...Makes love rich'. This suggests that even an hour, in love, is well spent. The word 'spent' is in juxtaposition with the reference to the lines 'bright as a dropped coin, makes love rich' and 'spend it not on flowers '. This line incorporates the significance of wealth, as even an hour spent in love, is precious. It also has a double role in the latter sentence; 'we find an hour together, spend it not on flowers' as this time, ...read more.

Throughout the poem, Duffy uses a myriad of poetic devices, including imagery. Even as far up as the second line; 'bright as a dropped coin'. This phrase evokes a falling coin, glinting as it drops. Duffy cleverly infuses the poem with metaphors as well, for the falling coin phrase is also a good metaphor. She also relates to themes in a relationship, for example, she could be relating the 'bright' dropping coin as referral to love, and how bright and vibrant it is, but also how the passion and zest can drop, like a coin. She may have written this in close reference to the word 'ditch' and how it has two meanings, the first being the lowered, dingy area which could illustrate the lack of gusto, or how the ditch promises privacy and the couple could be making love, which relates back to how active and full of relish the partners may be. ...read more.

This could be again, in close reference to 'nothing dark will end our shining hour'. The person could mean so much to her, that as a chandelier, or a spotlight, they would distinguish the darkness in their relationship. Using enjambment, in the penultimate paragraph, may imply the relationship will carry on, till the next stanza, in the poem of their life. Finally, she does explicitly show that 'time hates love', he 'wants love poor', which does she there is enmity and contrast between the two. Although love wants to stay and last, time wants to march on, but she shows how love can conquer evil, personified as time, for 'love spins gold, gold, gold from straw'. This shows the power and magnitude of love, how it can do anything, even 'spin gold from straw'. ?? ?? ?? ?? Chirag Pandya 12 Blue 23.9.10 ...read more.