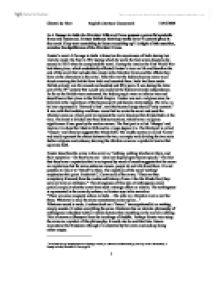 In A Passage to India the Marabar Hills and Caves possess a powerful symbolic force and resonance. Forster believed that they would have a central place in the novel. They were something to focus everything up. In light of this a

In A Passage to India the Marabar Hills and Caves possess a powerful symbolic force and resonance. Forster believed that they would have "a central place in the novel. They were something to focus everything up". In light of this assertion, examine the significance of the Marabar Caves. Forster's novel A Passage to India is based on his experiences of India during two visits he made: the first in 1912 during which he wrote the first seven chapters; the second in 1921 when he completed the novel. During the interim the First World War had taken place, which undoubtedly affected Forster's view on life and therefore the rest of the novel that includes the events in the Marabar Caves and the effects they have on the characters in the novel. After this war the Indians became more vocal about removing the British from India and resented them. India had been under British colonial rule for around one hundred and fifty years. It was during the latter part of the 19th century that a push was made by the Indians towards independence. As far as the British were concerned, the Indian people were an inferior race and should know their place in the British Empire. Forster was not a religious man; he believed in the importance of the human spirit and human relationships. His view, as he later expressed in 'Howard's End', was that human beings should "only connect." ...read more.

However, the idea of India as a muddle is seen by the Indians as a mystery. The word muddle suggests something hazardous, whereas mystery suggests something mystical perhaps caused by a spiritual force that is greater than man. Forster sets the scene for the events that take place in the caves early in the novel. Adela is "desirous of seeing the real India," and thus seeks out the Marabar caves. Gertrude M. White said, "The central episode of the entire novel is the experience of the two Englishwomen."6 Forster, metaphorically speaking, assaults the women with the caves in order to force a profound change in the mentality of both the women and the attitudes of the English and Indians. Near the start of the novel, Forster portrays Mrs. Moore as a devout Christian, both caring and kind. As mentioned earlier Forster had a philosophy of 'only connect' and in this novel, Mrs. Moore represents this idea, as she has no problem connecting to the country and the natives. Through her, he allows the reader to feel connected with the Indians and empathise with them. The Marabar caves, however, cause Mrs. Moore to feel disconnected with everything, which is a contradiction to this idea. Perhaps Forster was trying to demonstrate that the caves are so powerful that they cause disconnections. Mrs. Moore demonstrates this to Aziz when talking about Mrs. Callendar during their encounter in the mosque. ...read more.

Frederick C. Crews said, "The Marabar caves thrust to the surface a conflict between conventional and suppressed feelings"8. Subsequent to the Marabar caves outing, Adela's false accusation causes racial tensions to be thrust to the surface. Ultimately, it is this accusation, and thus the Marabar Caves, that leads to the trial that triggers an almost terminal breakdown between the British and Indians. In conclusion, the Marabar Caves play a significant role in shaping the events of the novel as well as symbolically representing many crucial aspects. They represent the nothingness of India; the futility of trying to build relationships between the British and Indians; and the mystery and muddle of India and its culture. They are also the tool that Forster uses to profoundly change the lives of the characters. They drive both people and cultures apart. It appears by the end of the novel that the Marabar Caves have triumphed. However, the novel does not end negatively as there is still hope for the future, which Forster suggests by the words "No Not Then." This impression of hope is enhanced by the symbol of the sky and the birth of Krishna. The Marabar caves are not going to rule forever. In the future, Indian and British cultures may be able to connect, but for the moment, it cannot happen. At the very end of the novel, both Fielding and Aziz meet for a final time on horseback. Fielding says, "Why can't we be friends now?" and Forster concludes, "But the horses didn't want it - they swerved apart... 'no, not yet,' and the sky said, 'no not there. ...read more.