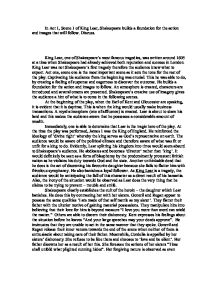 In Act 1, Scene 1 of King Lear, Shakespeare builds a foundation for the action and images that will follow. Discuss.

In Act 1, Scene 1 of King Lear, Shakespeare builds a foundation for the action and images that will follow. Discuss. King Lear, one of Shakespeare's most famous tragedies, was written around 1605 at a time when Shakespeare had already achieved both reputation and success in London. King Lear was not Shakespeare's first tragedy therefore the audience knew what to expect. Act one, scene one is the most important scene as it sets the tone for the rest of the play. Captivating his audience from the beginning was crucial. This he was able to do, by creating a feeling of suspense and eagerness to discover the outcome. He builds a foundation for the action and images to follow. An atmosphere is created, characters are introduced and several omens are presented. Shakespeare's creative use of imagery gives the audience a hint of what is to come in the following scenes. At the beginning of the play, when the Earl of Kent and Gloucester are speaking, it is evident that it is daytime. ...read more.

He does this by contrasting her with her sisters. Goneril and Regan appear to possess the same qualities 'I am made of that self mettle as my sister'. They flatter their father with the ulterior motive of gaining material possessions. They manipulate him into believing that their love for him is beyond measure "I love you more than word can wield the matter." Others are able to discern their dishonesty. Kent expresses his feelings about the situation before he leaves "And your large speeches may your deeds approve". He insinuates that they are unable to act in the same manner that they spoke. Goneril and Regan release their inner venom towards the end of the scene when neither of them is enthusiastic about taking care of their father. Meanwhile, Cordelia is appalled by her sisters' dishonesty. She refuses to be like them and chooses to 'love and be silent'. Her father disowns her as a result of her this. ...read more.

King Lear is blind to his eldest daughters' immense greed and the amount of love that Cordelia possesses for him. This serves to his demise. Also, Gloucester is physically and emotionally blind towards his legitimate son Edgar later on in the play. The image of war is also presented. When Kent tries to convince Lear that his actions were wrong he exclaims "The bow is bent and drawn; make from the shaft". This is symbol and a hint as to what will happen in the concluding scenes when there is a war between Cordelia and France against her sisters. It is ironic that King Lear says this as the only bow that is bent and drawn is the one held by his daughters against him. Act one, scene one clearly establishes a foundation for the rest of the play to follow. Death and destruction are expected as a tragic hero makes a terrible (and somewhat ridiculous) mistake. Lear was overconfident in assuming that his daughters would take care of him if he shared his kingdom and he will suffer immensely as a result of this. ...read more.