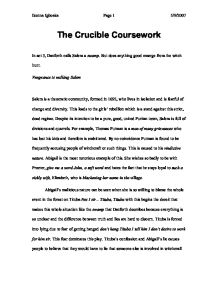 In act 3, Danforth calls Salem a swamp. But does anything good emerge from the witch hunt.

The Crucible Coursework In act 3, Danforth calls Salem a swamp. But does anything good emerge from the witch hunt. Vengeance is walking Salem Salem is a theocratic community, formed in 1692, who lives in isolation and is fearful of change and diversity. This leads to the girls' rebellion which is a stand against this strict, dead regime. Despite its intention to be a pure, good, united Puritan town, Salem is full of divisions and quarrels. For example, Thomas Putman is a man of many grievances who has lost his kids and therefore is embittered. By no coincidence Putman is found to be frequently accusing people of witchcraft or such things. This is caused to his vindictive nature. Abigail is the most notorious example of this. She wishes so badly to be with Procter, give me a word John, a soft word and hates the fact that he stays loyal to such a sickly wife, Elizabeth, who is blackening her name in the village. Abigail's malicious nature can be seen when she is so willing to blame the whole event in the forest on Tituba Not I sir... ...read more.

This makes those who believe them get sucked in, unable to escape. Others such as Putnam getting revenge on their neighbour, using the confusion in the hunt as his medium the world is mad. Procter, however, during his wife's arrest, begins to untangle a bit of these mysteries to discover there is nothing supernatural about what is happening in Salem. Vengeance is walking Salem - vengeance is walking Salem we are what we always were in Salem, but now the little crazy children are jangling the keys of the kingdom, and common vengeance writes the law! This warrants vengeance! I'll not give my life to vengeance. By this quote is meant that people using the hysteria to get one back at their neighbour and now it's easier than ever because vengeance writes the law. And the sources are being overlooked. Why do you never wonder is Parris is innocent or Abigail? He is so sure that Vengeance is walking Salem that he will give up his own good name by admitting an affair with Abigail to prove it into our pit we will together slide. ...read more.

It is a cold house I kept Elizabeth admits linking back a scene early on with Proctor and Elizabeth dining. Proctor says It's winter in here yet. Using the idea of cold as a metaphor for the chilly atmosphere they shared before expressing her deepest love for Proctor. This witch-hunt then brings about the strengthening of a life long cold relationship. And I believe that this is not the only good that comes out of this witch-hunt. Giles, not being willing to tell a lie and so refusing to talk, keeping his honour he would not say aye or nay his indictment and being crushed for it. Proctor not willing to give his name up for all to see a lie it is my name and I cannot have another ... it is a lie and being hanged for it. People, who at last see the uncertainty, fear and hence needless slaughtering, a witch-hunt brings about. And especially Hale who sees Proctor, a good man and a friend, hanged for a crime he certainly didn't commit simply because he had courage enough to get to the bottom of this swamp and discover the real motives for the witch hunt; Greed, l**t, envy, and hatred. ?? ?? ?? ?? Ikenna Igboaka Page 1 5/9/2007 ...read more.