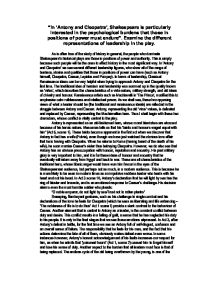 &quot;In 'Antony and Cleopatra', Shakespeare is particularly interested in the psychological burdens that those in positions of power must endure&quot;. Examine the different representations of leadership in the play.

"In 'Antony and Cleopatra', Shakespeare is particularly interested in the psychological burdens that those in positions of power must endure". Examine the different representations of leadership in the play. As is often true of the study of history in general, the people who dominate Shakespeare's historical plays are those in positions of power and authority. This is simply because such people will be the ones to effect history in the most significant way. In 'Antony and Cleopatra' we see several different leadership figures, who show all of the range of burdens, strains and qualities that those in positions of power can have (such as Antony himself, Cleopatra, Caesar, Lepidus and Pompey). In terms of leadership, Classical Renaissance ideas can be very helpful when trying to approach Antony and Cleopatra for the first time. The traditional idea of heroism and leadership was summed up in the quality known as 'virtus', which describes the characteristics of a virile nature, military strength, and old ideas of chivalry and honour. Renaissance artists such as Machiavelli in 'The Prince', modified this to emphasise calm ruthlessness and intellectual power. As we shall see, these two opposing views of what a leader should be (the traditional and renaissance ideals) are reflected in the struggle between Antony and Caesar. Antony, representing the old 'virus' values, is defeated and replaced by Caesar, representing the Machiavellian hero. Thus I shall begin with these two characters, whose conflict is vitally central to the play. ...read more.

This seems all the more heartless when we realise that Antony was a close and dear friend to Octavius's father, Julius Caesar. However at the same time he is shown as the successful strategist and ruler. This pehaps is meant to demonstate the idea that a truly great leader cannot be an overly emotionally figure. He represents Roman efficiency and Duty to the state, whose interests must be held before all others, and achieved by whatever means necessary. This manipulative nature is shown through his reconciliation with Antony. Caesar needs Antony's military skill in the war against Pompey, and can see that the Roman people, who do not love Caesar ("Caesar gets money where/ he loses hearts" Act2 Scene1), will follow the heroic Antony into battle. The marriage that he orchestrates between his sister and Antony shows that he is a figure who is only able to gain loyalty through his manipulation of others. We must still recognise, however, that Caesar has all the qualities necessary to be a good leader. Indeed he seems not to feel any of the psychological burdens that come with leadership. He seems to be sufficiently focused on the success of Rome, to think that any burdens he does feel must be tolerated out of a sense of duty, but also to satisfy his ambition. He sees Antony as having become a "strumpet's fool", and his pursuit of pleasure being an intolerable burden placed on the triumvirate. ...read more.

Even so, neither generous tolerance, nor any other of the humane qualities that Lepidus shows, are seen (at least in Shakespeare's eyes) to be insignificant on the grand scale of events. Our last image of him, is the sight of the third "pillar of the world" being carried out drunk. Lepidus's eventual imprisonment by Caesar acts as an example that, in the world of politics and power, benevolence will always be crushed by ruthlessness. Pompey, like Lepidus is another slightly mediocre leader. His reputation and power stem from the esteem in which his father Pompey the Great was held. Indeed the strong position he is in only exists because of the total disarray that the triumvirate is in. Despite this he accepts the terms he is offered by them very readily (largely due to Antony's presence), a decision that causes Menas to doubt his judgement: "the father, Pompey, would ne'er have made this treaty". Pompey's refusal to sanction the murder of the triumvirs, whilst admitting that he would have welcomed its being done without his knowledge, reveals a lot about Pompey. It shows at once a cowardice and lack of ruthlessness that, (like Lepidus) means that he can never be a truly successful leader. Through the characterisation of the different leaders mentioned above, Shakespeare manages to demonstrate the different strains that those in positions of power must tolerate, and we see that in the end there is no room for romantic compassion or weakness, if one wants to become a successful leader. ...read more.