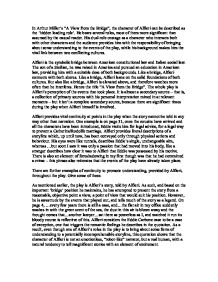 In Arthur Miller's &quot;A View from the Bridge&quot;, the character of Alfieri can be described as the 'hidden leading role'.

In Arthur Miller's "A View from the Bridge", the character of Alfieri can be described as the 'hidden leading role'. He bears several roles, most of them more significant than assumed by the casual reader. His dual-role onstage as a character who interacts both with other characters and the audience provides him with the responsibility of bringing about some understanding to the events of the play, while his background makes him the vital link between two conflicting cultures. Alfieri is the symbolic bridge between American constitutional law and Italian social law. The son of a Sicilian, he was raised in America and pursued an education in American law, providing him with a suitable dose of both backgrounds. Like a bridge, Alfieri connects with both shores. ...read more.

Alfieri provides literal descriptions of a storyline which, up until now, has been conveyed only through physical actions and behaviour. His eyes were like tunnels, describes Eddie's single, unchangeable aim, whereas ...but soon I saw it was only a passion that had moved into his body, like a stranger describes how clear it was to Alfieri that Eddie was possessed by his motive. There is also an element of foreshadowing in my first though was that he had committed a crime - this phrase also reiterates that the events of the play have already taken place. There are further examples of continuity to promote understanding, provided by Alfieri, throughout the play. Give some of these. As mentioned earlier, the play is Alfieri's story, told by Alfieri. ...read more.

a potentially incomprehensible storyline, this quotation shows that the character of Alfieri is not an emotionless, "robot-like" narrator, but a real human, with a natural tendency to tell magnificent stories with an element of excitement. This can also be seen in his closing remarks on page 64, where he 'admits' to mourning Eddie. He's only human, and he's torn between sympathy and pity. He is a bridge between two cultures, and he cannot make a choice to devote himself completely to one side. It is the job of a bridge to link two sides together. Similarly, it is his job to maintain a link between the American and Italian cultures, yet he is torn between the two. Here we truly see Alfieri's dual-character, making him both a narrator and a character. Arthur Miller - A View from the Bridge ...read more.