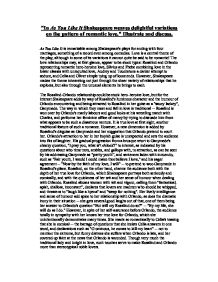 &quot;In As You Like It Shakespeare weaves delightful variations on the pattern of romantic love.&quot; Illustrate and discuss.

"In As You Like It Shakespeare weaves delightful variations on the pattern of romantic love." Illustrate and discuss. As You Like It is remarkable among Shakespeare's plays for ending with four marriages, something of a record even among comedies. Love is a central theme of the play, although in some of its variations it cannot quite be said to be romantic! The love relationships may, at first glance, appear to be stock types: Rosalind and Orlando representing romantic hero-heroine love, Silvius and Phebe combining love in the lower classes with unrequited love, Audrey and Touchstone a darker attempt to seduce, and Celia and Oliver simple tying up of loose ends. However, Shakespeare makes the theme interesting not just through the sheer variety of relationships that he explores, but also through the unusual elements he brings to each. The Rosalind-Orlando relationship could be stock hero-heroine love, but for the interest Shakespeare adds by way of Rosalind's luminous character and the humour of Orlando encountering and being attracted to Rosalind in her guise as a "saucy lackey", Ganymede. The way in which they meet and fall in love is traditional -- Rosalind is won over by Orlando's manly labours and good looks at his wrestling match with Charles, and performs her feminine office of mercy by trying to dissuade him from what appears to be such a disastrous venture. ...read more.

Touchstone's original intentions with Audrey are extremely simple and do not include any legitimate marriage ceremony. This is a love relationship at the other end of the spectrum which turns out happily in the end, ironically because of Jaques' interference, which actually does some good for once. This is the one love in the play that I would not class as "delightful" as I think that Audrey is being taken advantage of, and Touchstone, while an admirable character with regard to his behaviour with Rosalind and Celia, is insufferably condescending and shows off most annoyingly. Audrey seems to think that Touchstone is better than she is simply because she cannot understand his "courtly" speech, accepting all manner of insults, such as "to cast away honesty upon a foul s**t, were to put meat into an unclean dish", and being completely taken in by the false marriage that Sir Oliver Martext is about to carry out. She would probably be happier with William, who appears to share her simple, honest outlook on life and loves her, as opposed to the baser emotion Touchstone seems to feel for her. However, if not romantic or delightful, this certainly is a variation from the more idealised forms of love that the other pairs of lovers share. Phebe and Silvius are pastoral lovers, and also an example of unrequited love. Silvius' declarations of love are highly romantic -- "Whoever loved that loved not at first sight?" ...read more.

However, As You Like It is a comedy -- and ignoring the improbability of Celia's and Oliver's falling in love, it does serve the comic nature of the play. It means a happy ending for Celia, who has been such a faithful friend to Rosalind throughout the play that she deserves a reward. It rewards and confirms Oliver's repentance -- Celia has proven herself so good that it would be unlikely for her to fall in love with a villain. There is a pleasant symmetry in her cousin Rosalind's marriage to Orlando and Celia's marriage to Orlando's brother Oliver. The audience will also be greatly amused at the fact that although Celia has been teasing Rosalind ever since she fell in love with Orlando, she herself is not proof to sudden and irrational love. All in all, their marriage is necessary for the comic resolution of the play. The many love relationships in As You Like It are delightful in their romanticism and the humour which Shakespeare has dashed into each of them, enhancing the happy nature of the play. Various situations of love are explored -- true love at first sight, unrequited love, even a hint of homosexuality in Orlando's attraction to Ganymede and Phebe's falling for Ganymede, who is really a woman. Their contrasting variety causes them to complement one another in the play's theme of love and the foolish things it makes people do, making As You Like It both entertaining and romantic. ...read more.