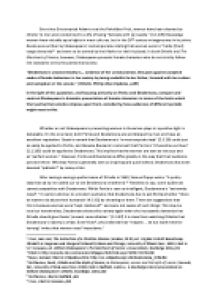 In both Othello and The Merchant of Venice, however, Shakespeare presents female characters who do not strictly follow the standards set by the patriarchal society.

﻿Ever since Eve tempted Adam to eat the Forbidden Fruit, women have been deemed as inferior to men and condemned to a life of being ?delicate with [a] needle.? (4.1.185) Nowadays women have virtually equal rights in most cultures, but in the 16th century misogyny was in its prime. Books were written by Shakespeare?s contemporaries stating that women were to ?holde [their] tonge demurely[1]? and were to be owned by their father or their husband. In both Othello and The Merchant of Venice, however, Shakespeare presents female characters who do not strictly follow the standards set by the patriarchal society. ?Desdemona?s unconventiality is... evidence of her unnaturalness. She goes against accepted codes of female behaviour in her society by being undutiful to her father, forward with her suitors and outspoken in the senate.? (Othello, Phillip Allan Updates, p.89) In the light of this quotation, and focusing primarily on Portia and Desdemona, compare and contrast Shakespeare?s dramatic presentation of female characters in terms of the limits which their patriarchal societies impose upon them, considering how audiences of different periods might react to this. ...read more.

Portia is paradoxically conformist and non-conformist at the same time. She preserves her reputation by obeying her father’s will, yet some of her actions suggest that she is rebelling against the patriarchal society. For example, she asks Nerissa to “put a glass of Rhenish wine on the contrary casket” (1.2.59) before the alcoholic suitor from Germany takes his pick of the caskets. Moreover, critics such as Moody and Fiedler[12] have argued that although Portia decided that she will not “teach [Bassanio] how to choose right,” (3.2.10-11) she hints that the correct casket is the leaden one, since the song before his selection has the words “bred”, “head” and “nourishèd” in it, which all coincidentally rhyme with “lead.” They believe that it is “quite unbelievable” that Bassanio “should have chosen it unprompted.[13]” However, this is a rather cynical view and it violates “the dramatic and literary conventions the play exploits[14].” Before Bassanio chooses the casket, we know that he is going to choose correctly, since the “third lover [in a fairytale] will free the imprisoned princess from enchantment after the first two suitors have failed[15].” Bassanio, with “no purse of [his] own, is a man who is “seemingly a failure in the eyes of ...read more.

It seems contradictory seeing as the women are at their most powerful in a place of ultimate masculinity. The women are empowered by the male presence and the freedom of speaking in public, rather than feeling intimidated. David McPherson[20] writes that ?the boldness [shown in the court room] may be explicable in the light of Venetian education for a few privelaged women.? Shakespeare could have been aware of this, and could be presenting Venice and its women as more socially advanced. It could, of course, be interpreted in completely the opposite way, saying that Venetian women are unruly and unnatural precisely because they are educated. The plays can be interpreted in numerous ways according to the whims of the director and the actors. There can be feisty Desdemonas and arrogant Portias; yet a lascivious Desdemona and a humbled Portia can work just as well. In the future, as the balance of power between men and women inevitably changes, the play will once again be seen in a different light. We shall never know exactly how Shakespeare intended these characters to come across, but they certainly show how powerful women can be, even when they are oppressed by a patriarchal and patrilineal society. ...read more.