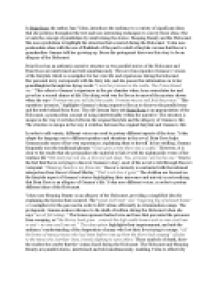 In Briar Rose, the author Jane Yolen, introduces the audience to a variety of significant ideas that she portrays throughout the text

﻿In Briar Rose, the author Jane Yolen, introduces the audience to a variety of significant ideas that she portrays throughout the text and uses interesting techniques to convey these ideas. She reveals the concept of parallelism by intertwining the stories: Sleeping Beauty and the Holocaust. She uses symbolism to highlight the atrocities that occurred during the Holocaust. Yolen uses postmodern ideas with the use of flashback of the past to retell a fairytale version that Becca?s grandmother Gemma told her growing up. Becca the protagonist discovers this story to be an allegory of the Holocaust. Briar Rose has an authentic narrative structure as two parallel stories of the Holocaust and Brair Rose are intertwined and told simultaneously. The novel incorporates Gemma?s version of the fairytale which is a metaphor for her own life and experiences during the holocaust. Her personal story corresponds with the fairy tale, and she passes this information on to her granddaughter through her dying words ?I was the princess in the castle. The Prince kissed me.? This refers to Gemma?s experience in the gas chamber when Aron resuscitates her and gives her a second chance at life. Her dying wish was for Becca to unravel the mystery shown when she says ?Promise me you will find the castle. Promise me you will find the prince.? This repetition ?promise,? highlights Gemma?s dying request to Becca to discover the parallel story and the truth behind Briar Rose. ...read more.

?All the bones of many princes who had been before rose up from the thorn bush singing? alludes to the many who lost their lives, bravely fighting to save others. These symbols of death, show the readers the cruelty that the victims faced during the Holocaust. The Holocaust and Sleeping Beauty are parallel stories, intertwined and told simultaneously, enabling Yolen to effectively account ideas of people?s traumatic experience. Within the fairy tale genre, Yolen uses the fairies to convey ideas of the callousness of the Nazis. The fairies ?fingers as long and thin as straws? makes reference to the emaciated bodies of victims who were overworked and starved. The evil fairy?s eyes ?burnt by cigarettes?, uses the verb ?burnt? to imply the burning of the bodies of victims. The reference to the fairy?s uterus being? an empty tea cup,? metaphorically conveys the experimentation on women that damaged their bodies and prevented their ability to become mothers. The evil fairy is paralleled with the evil Nazis who ?made prisoners roll naked in the snow for hours,? illustrating their desire to not only murder their victims, but to make them suffer as well. Yolen softens the harshness of the Holocaust by using symbolism of the fairy?s ?big black boots,? demonstrating the darkness and the hell that people endured under the Nazi?s watch. Yolen uses the fairytale genre to portray the cruelty of the Nazis, and encourage empathy for the victims. ...read more.

It is also ironic that Gemma is saved by Josef, an unexpected hero, who has a place in the story as homosexuals were also victims of the holocaust. A concentration camp is no inheritance,? indicating Becca expected a reward, as the story is presented in a fairytale genre. Becca is rewarded in a contemporary way, with an understanding and supportive partner, Stan, as he ?had been the one to urge her to continue,? to unravel the story. ?It ends happily, you know, even though it is awfully sad along the way.?Becca is also rewarded gaining knowledge of the truth about Gemma?s life, allowing her to have a stronger bond with her family history. It is possible to view Gemma?s life in America with family as a happy ending. Yolen ruins the happy ending fairytale genre, asserting at the end of the book ?I know of no women who escaped from Chelmno alive.? This teaches the audience an idea that this is no sentimental fairytale but a dark tale of humanity. Yolen uses Brair Rose, as an allegory of the Holocaust, enabling to raise important ideas of victims horrific experience. She uses symbolism to highlight the cruelty, discrimination and the hardships victims endured. She engages the audience by using metaphors, in order to commemorate millions of victims who died, in order to help save lives. ...read more.