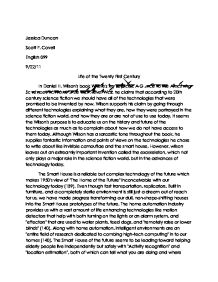 In Daniel H. Wilson's book Where's my Jetpack: A Guide to the Amazing Science Fiction Future that Never Was, he claims that according to 20th century science fiction we should have all of the technologies that were promised to be invented by now.

Jessica Duncan Scott F. Covell English 099 9/22/11 Life of the Twenty First Century In Daniel H. Wilson's book Where's my Jetpack: A Guide to the Amazing Science Fiction Future that Never Was, he claims that according to 20th century science fiction we should have all of the technologies that were promised to be invented by now. Wilson supports his claim by going through different technologies explaining what they are, how they were portrayed in the science fiction world. and how they are or are not of use to use today. It seems the Wilson's purpose is to educate us on the history and future of the technologies as much as to complain about how we do not have access to them today. Although Wilson has a sarcastic tone throughout the book, he supplies fantastic information and points of views on the technologies he chose to write about like invisible camouflae and the smart house. However, wilson leaves out an extreamly important invention called the exoskeleton, which not only plays a major role in the science fiction world. ...read more.

Invisible camouflageis yet another invention only reachable in the inagination of science fiction and fantasy writers. For example, in a very popular young adult series, Harry Potter inherits an invisibility cloke from him father and when put on, Harry disappears completely. Invisible Camouflage is an extremely awesome concept used in many science fiction and fantasy works and could be used to any persons advantage. The Military could use invisibility in hostage situations, or covert operations along with getting men and woman out safely to medics. As far as anyone knows the military does not have invisible camouflage yet, but are working on "adaptive camouflage" (107). Adaptive camouflage actively changes what you or your vehicle resembles to match the environment, compared to traditional camouflage, where you use unclear colors and shapes to blend in visually with your surroundings. The theory is to wrap yourself in real time images like the environment surrounding you. So it's like putting on a Unisex jumpsuit that's a television screen. Researchers from Tokyo University in Japan have developed a prototype of adaptive camouflage. ...read more.

XOS 2 is an amazing development with the exoskeleton technology, but we still have many mountains to climb before anyone can wear a fully equpied Iron Man Exoskeletons. Daniel Wilson brought to my view the technologies of Smart House and Invisible Camouflage, along with the disadvantages and advancements of them today. Although he did not talk about the exoskeleton super suit Wilson gave accurate information on the Smart House and invisible camouflage with a humorous tone that entrapped me. The technologies of the future are an interesting thought, but so far that is all that technology is. The exoskeleton is nowhere near ready to be used in the military anytime soon, we are not much closer to invisibility than we were when science fiction gave birth to the idea, and the thought of an all-plastic house that can clean, cook, and replicate anything while thinking for itself is almost absurd. I await the day for science fiction to prove me wrong, but until than I will clean my own house, dream of invisibility and rely on non-cyborg soliders to protect me. . ...read more.