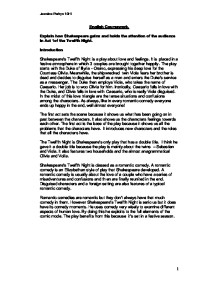 English Coursework. Explain how Shakespeare gains and holds the attention of the audience in Act 1of the Twelfth Night. Introduction Shakespeare's Twelfth Night is a play about love and feelings. It is placed in a festive atmosphere in which 3 couples are brought together happily. The play starts with the Duke of Illyria - Orsino, expressing his deep love for the Countess Olivia. Meanwhile, the shipwrecked twin Viola fears her brother is dead and decides to disguise herself as a man and enters the Duke's service as a messenger. The Duke then employs Viola, who takes the name of Caesario. Her job is to woo Olivia for him. Ironically, Caesario falls in love with the Duke, and Olivia falls in love with Caesario, who is really Viola disguised. In the midst of this love triangle are the tense situations and confusions among the characters. As always, like in every romantic comedy everyone ends up happy in the end, well almost everyone! The first act sets the scene because it shows us what has been going on in past between the characters. It also shows us the characters feelings towards each other. The first act is the base of the play because it shows us all the problems that the characters have. It introduces new characters and the roles that all the characters have. The Twelfth Night is Shakespeare's only play that has a double title. I think he gave it a double title because the play is mainly about the twins - Sebastian and Viola. It also features two households and the almost anagrammatical Olivia and Voila. Shakespeare's Twelfth Night is classed as a romantic comedy. A romantic comedy is an Elizabethan style of play that Shakespeare developed. A romantic comedy is usually about the love of a couple who have a series of misadventures and confusions and then are finally reunited in the end. ...read more.

This link between the two characters later on forms a trustworthy friendship even though Olivia thinks that Viola is a man - Caesario. The purpose of Act 1 Scene 2 is to introduce 3 new characters. Viola and her twin Sebastian are introduced by the shipwreck. And every ship has a Captain so he gets introduced when he comforts Viola. This scene is a flash back to when the shipwreck happened and Viola is talking about her feelings towards her brother and his feared death. Another purpose of the scene is to show the audience the link that is created between Olivia and Viola. In this scene the audience don't really know much about Sebastian apart from he is Viola's twin and that he is feared to be dead. To the audience, Viola seems an indecisive type of person who doesn't know what to do without her brother. She seems very emotional and depressed. On the other hand the Captain is the type of person you can rely on when you need someone to help you through tough times. He is brave and helps Viola to make up her mind about what she will do in the future. This shows that he is understanding and helpful character. In Act 1 Scene 2 the Captain uses a persuasive language when Viola is upset and unsure of what to do next; he also gives her suggestions about what she could do. By giving suggestions to Viola he strengthens her character and shows her she can carry on with life without Sebastian. An example of this suggestive and persuasive language could be: "Be you his eunuch, and your mute I'll be." This quote shows Viola an option she could take and the Captain persuades her to take it. Viola's type of language is very different to the Captain's. Unlike him, she shows her worries and questions her brother's death. ...read more.

The theatrical imagery that Olivia uses when she talks to Viola for the first time could be that Olivia shows the audience that she fancies Viola but she doesn't let on anything to Viola. This creates more confusion for the characters. Olivia totally ignores the fact that Viola is trying to persuade her to love Orsino but she does pay attention to Caesario's looks. She expresses this by describing her looks to Caesario in a catalogue type way. Viola is only pretending to be Cesario so she feels almost offended by what Olivia is saying. Olivia doesn't know that Caesario is really Viola in disguise so she doesn't stop even when Viola is in a stress. This annoys Viola even more so she goes back to Orsino. Olivia last lines in the scene: "I do I know not what, and fear to find Mine eye too great a flatterer for my mind. Fate, show thy force; ourselves we do not owe What is decreed, must be: and be this so." In her last lines she is talking about her eyes having too much influence over her mind and that we sometimes do not control our thoughts. This means that she has fallen for Caesario even though Orsino is asking for her love. She believes that she doesn't have control over this thought. These words are very important to the play because it sets the base of confusion when Sebastian arrives. Conclusion Act 1 as a whole is designed to introduce all the characters and to give a base to the play. The confusions that unravel in amongst it give the audience an urge to want to read on. The act sets the scene because it shows us nearly all of the problems that the characters are involved in. The audience would want to know if these problems got sorted out and what happens with the love triangle. What would the Twelfth Night be about if it didn't have its problems??? ?? ?? ?? ?? Jasmine Parkyn 10HI 1 ...read more.