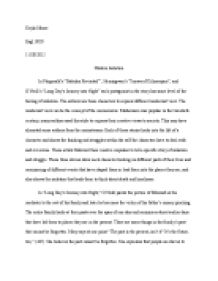 In Fitzgeralds Babylon Revisited, Hemingways Snows of Kilimanjaro, and ONeills Long Days Journey into Night each protagonist in the story has some level of the feeling of isolation

﻿Kayla Moore Engl 3020 11/28/2012 Modern Isolation In Fitzgerald?s ?Babylon Revisited??, Hemingway?s ?Snows of Kilimanjaro?, and O?Neill?s ?Long Day?s Journey into Night? each protagonist in the story has some level of the feeling of isolation. The authors use these characters to express different modernist view. The modernist view can be the concept of the unconscious. Modernism was popular in the twentieth century; many authors used this style to express their creative views to society. This may have alienated some authors from the mainstreams. Each of these stories looks into the life of a character and shows the thinking and struggles within the self the characters have to deal with and overcome. These artists followed their creative impulses to tell a specific story of isolation and struggle. These three stories show each character looking on different parts of their lives and reminiscing of different events that have shaped them or lead them into the places they are, and also shows the isolation that leads them to think about death and loneliness. In ?Long Day?s Journey into Night,? O?Neill paints the picture of Edmund as the mediator to the rest of his family and later he becomes the victim of his father?s money pinching. ...read more.

That?s what I wanted?to be alone with myself in another world where truth is untrue and life can hide from itself,? (457). Edmund is explaining his walk alone in the fog. He is walking alone in the cold despite the illness he has and getting sicker. He can think and be himself in his own world or the world he is a part of in his isolation. His isolation leads him to his thoughts of death. It may seem morbid, but in Modernism this is just the creative struggle and the sense of self of the character coming out of O?Neill?s writing. The isolation Charles feels is from his family. His sister-in-law is fighting to keep his daughter from him. His past once again comes to be a problem for his future. He has worked diligently to correct his past for the betterment of his and his daughter?s lives. He still has many obstacles to overcome. He also tries to distant himself from the acquaintances he once had during his parting days when he made most of his mistakes. He still struggles with drinking and still does not spend near enough time with his daughter. ...read more.

??she had built herself a new life and he traded away what remained of his old life./ He had traded it for security, for comfort too, there was no denying that and for what else? He did not know,? (832). He had become isolated from the person he once was. He was starting to become a lot like his gangrened leg; callused, hard, and cold. His life was starting to become rotten much like his leg as well. His life had become stagnant and as a result so had he as a person. Harry had always done just what he wanted and he fund someone that had the money to allow him to do it and support him and he wanted something different. He felt his life had been wasted. Hemingway creates an alienation of Harry from his former self. The authors writing from the Modernist view express a lot of alienation from society and less on nature and historic events. The Modernist view allows authors to express different creative senses of themselves or the self within the character in their stories. The characters are living in the twenties in most stories, which was avery exciting and vibrant time to live and these characters are made to become isolated and become lonely and fantasize about thoughts of death. ...read more.